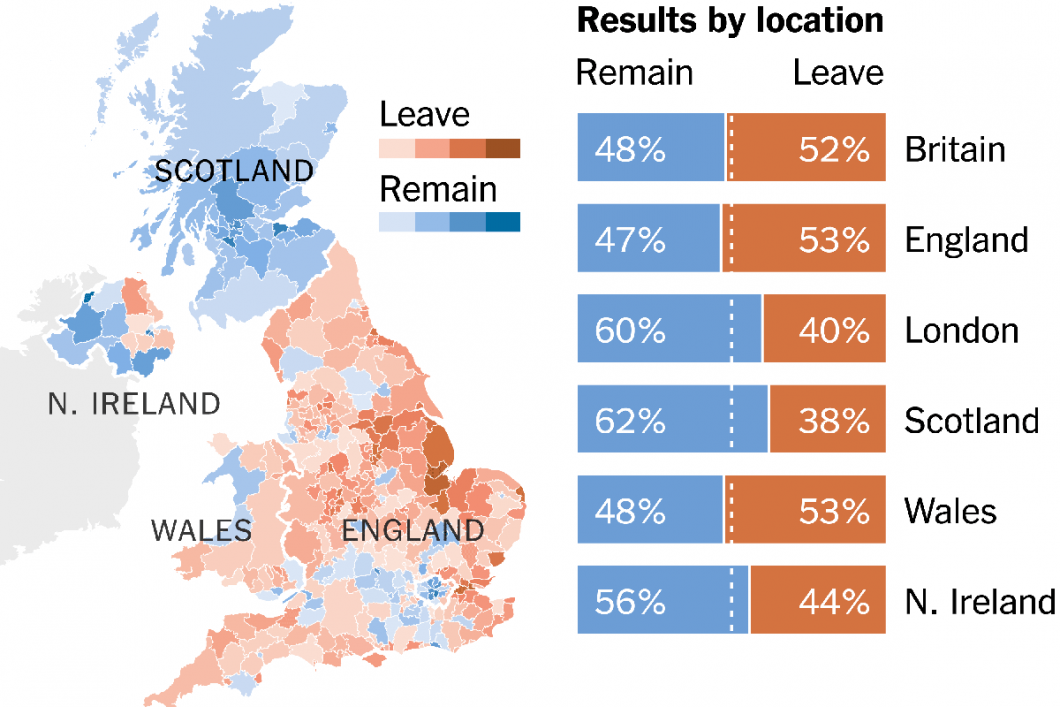 All you need to know about the brexit agenda!

Definition: It is an abbreviation for the term “British exit”, similar to “Grexit” that was used for many years to refer to the possibility of Greece leaving the Eurozone. Brexit refers to the possibility of Britain withdrawing from the European Union (EU) after the referendum on June 23.

Description: Why the Call for Referendum?

When David Cameron became the prime minister of Britain in 2010 as head of a Conservative Liberal Democrat coalition, he had to withstand pressure about a Europe vote from the pro-exit UK Independence Party and from restive eurosceptics in his own party. Finally, in 2013 he promised an in-out referendum on EU membership if the Conservatives won the 2015 election. He secured an absolute majority in 2015 and hence the referendum.

Who is Against Brexit?

Who is favouring Brexit:

Brexit, Explained: 7 Questions About What It Means and Why It Matters

The debate leading up to this week’s vote is playing out, however, as a broader choice over what national values to prioritize.

Pro-Brexit advocates have framed leaving the European Union as necessary to protect, or perhaps restore, the country’s identity: its culture, independence and place in the world. This argument is often expressed by opposition to immigration.

“Remain” supporters typically argue that staying in the union is better for the British economy and that concerns about migration and other issues are not important enough to outweigh the economic consequences of leaving.

The debate has also cut along the country’s famously deep class divides: Voters with less money and education are more likely to support leaving the union. Robert Tombs, a historian at the University of Cambridge, said this stems from a sense of abandonment among poor and working-class Britons. The Brexit debate has become a vessel for anti-establishment and anti-elite feelings directed at the leaders of mainstream British political parties as much as at Europe.

Neither side is defending the European Union as a meaningful or admirable institution. In part, this speaks to particularly British views that the rest of Europe is somehow alien.

This also reflects a Euroskepticism, or opposition to the European Union, rising across the bloc as the union veers from crisis to crisis. In this way, the Brexit vote is a particularly noticeable manifestation of a sense that European institutions have fallen short of their lofty promises and have created burdens, such as absorbing migrants or bailing out troubled economies, that many Europeans are tired of bearing.

2. What is the case for leaving?

A lot is implied in one of the campaign’s slogans, “Take control.” Britain’s loss of full authority over its economic policies and regulations has so rankled many of the country’s citizens that it has spawned an entire genre of urban legends over the years, called “Euromyths.”

These stories usually feature some aspect of classically British culture that is supposedly under threat. One claimed that double-decker buses were to be banned, while another suggested that fish and chips would have to be written in Latin on menus. The subtext is barely subliminal at all: Gray-suited Brussels bureaucrats are the enemy of Britishness, a threat to Britain’s identity in all its deep-fried, double-decker glory.

“There are two things at play here,” said Brian Klaas, a fellow in comparative politics at the London School of Economics. “One is the cultural nostalgia for Britain’s lost place in the world. This idea that Britain used to matter, Britain used to be able to do things without having to consult Brussels.”

Then there is immigration. “There’s this feeling that we’re losing our cultural identity and our national identity,” Mr. Klaas said, “at the same time that there’s this influx of people who are willing to work for low wages.”

A 2013 British Social Attitudes Survey found that more than three-quarters of Britons want the country’s immigration policies reduced, and about 56 percent said they should be reduced “a lot.”

Though Britain has accepted a small number of refugees relative to other European countries, British tabloids have implied the country is being overrun by an uncontrollable “swarm” or “tide” of foreigners. Labor migration, particularly from Eastern Europe, has often been painted as economically threatening.

Terrence G. Peterson, a fellow at Stanford University’s Center for International Security and Cooperation, said there is “a sense that Britain has lost something, that it has lost its sovereignty.”

“It can’t close its borders in the way that it wants,” he said. “It can’t have the economic policies it chooses.”

3. What is the case for staying?

What is most striking about the “Remain” campaign is what it has not done: countered the arguments for leaving. Rather than defending the European Union or immigration as good for Britain, the campaign warns that leaving would be disastrous for the British economy.

Most economists agree with that claim. Europe is Britain’s most important export market and its greatest source of foreign direct investment, and union membership has been crucial to establishing London as a global financial center. A British exit would jeopardize that status — and the high-paying jobs that come with it.

The mere fact of the referendum has already affected the economy; the pound is at its lowest valuation in seven years.

But it is telling that those who want to stay, including Prime Minister David Cameron and the leadership of Britain’s two main political parties, have not expressed much enthusiasm for the European Union itself. Instead, their arguments are focused narrowly on British self-interest. Their message is not that membership in the bloc is an exciting opportunity so much as a basic economic necessity.

That is a sign of how unpopular the union has become throughout Britain, according Mr. Klaas, partly because of bad public relations. “If you get funding from Europe for a road, you take credit,” he said. “But if you can’t get funding, it’s Europe’s fault.”

4. Why are Britons so wary of Europe?

Spend enough time in the United Kingdom, and you will hear people refer to “the Continent.” Travel agency windows advertise flights and package tours “to Europe,” as if it were someplace else.

As Mr. Peterson of Stanford put it, “Britain has always kept Europe at a distance, even when they were favorable to the E.U.”

Britain initially refused to join the European Economic Community when it was founded in 1957. It became a member in 1973, only to have a crisis of confidence that led to a similar exit referendum two years later. (The pro-Europe campaign won that round with 67 percent of the vote.)

A strain of populist opposition to Europe remained in the decades that followed. Britain has never joined other countries in using the euro as currency, for example, or participated in the union’s Schengen Area open-borders agreement.

Recent challenges within the European Union have given Euroskepticism new urgency.

“There wouldn’t be a referendum without the eurozone crisis, which made the E.U. look badly organized and dysfunctional,” said Charles Grant, the director of the Centre for European Reform, a London-based research group. “The refugee crisis hasn’t helped either. It made the E.U. seem out of control.”

Mr. Peterson said the deeper issue is that the union remains an unfinished project, which allowed these economic and migration crises to become so severe.

The European Union never developed centralized political institutions strong enough to manage its diverse constituent countries. Individual nations have little incentive to make sacrifices for the common good, and European unity is weakest when it is needed most.

you can also read : why do many countries drive on the left side of the road

6. What will happen to Britain if it leaves?

Projections differ significantly over the precise economic effect, but there is a consensus that leaving would hurt Britain financially, at least in the short term.

Without access to the union’s open markets, Britain would probably lose trade and investment. And while the influx of migrant workers has created anxiety over British culture and identity, losing that labor force could lead to lower productivity, slower economic growth and decreased job opportunities, a study by Britain’s National Institute of Economic and Social Research found.

A Brexit could also quickly spawn, err, a “Scexit.” Nicola Sturgeon, the first minister of Scotland, has said that if Britain votes to leave the European Union, she will hold a new referendum in which Scots could vote to exit Britain — and then rejoin the union as an independent nation.

Scotland’s voters rejected such a measure by nearly 10 points in 2014, but analysts say a Brexit could change that because the Scots overwhelmingly support European Union membership.

If Scotland were to leave, that could dramatically alter Britain’s political character, as Scotland’s members of Parliament lean to the left.

7. What are the wider ramifications?

Britain makes up about a sixth of the European Union’s economy. A Brexit, Mr. Klaas said, “would be akin to California and Florida being lopped off the U.S. economy.”

That destabilization could affect the United States’ economy: Last week, the Federal Reserve in Washington cited the possibility of a Brexit as a reason to not raise interest rates.

There could be political consequences, as well. If Britain leaves the union, that could give momentum to the nationalistic, anti-migrant message and policies of populist, far-right parties that are already rising across Europe.

The implications for the European project itself are unclear, but that uncertainty may be the greatest threat to the union, which has helped bring Europe 70 years of peace and is already under growing strain.

It also undermines trust between member states, whose commitments seem less reliable every time one of them toys with leaving.

“Members of the eurozone will realize that things can come unstuck,” Mr. Grant said. “Entropy can happen.”

In his view, Germany already has too much power in the bloc, and a British exit would make that imbalance more pronounced. It would undermine the European Union’s legitimacy and make it more difficult to respond to internal crises, like the Greek economy or the migrant influx, and to outside security threats, he said.

Mr. Klaas said, “A more unified Europe is a powerful counterbalance to people like Vladimir Putin.”

“Putin has stayed silent on this,” he said of the Russian leader. “But he’s probably silently cheering the pro-Brexit side.”