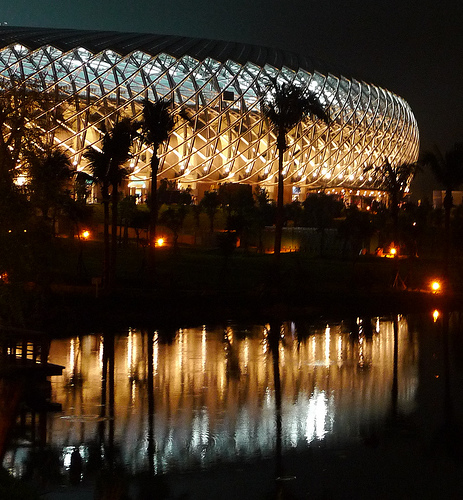 Sports stadiums operate like amusement parks and shopping malls, providing recreation and entertainment activities such as seating, restrooms, food and beverages, restaurants and cafes, car park, and waste disposal for thousands of spectators. A sports stadium can be used for many sports activities such as football, rugby and athletics, probably costing tens of thousands of dollars to host any single sporting event. According to a project on U.S. sports stadiums and arenas in energy management and energy efficiency investment conducted by Masters students in Duke University in 2011, a sports stadium uses 5-10 MW of electricity during an event, which is equivalent to 5,000 home uses. In an effort to reduce their carbon footprint and improve their energy efficiency, sports stadiums are being designed and built using sustainable materials and technologies. Many stadiums are embracing renewable energy. For example, stadiums are using direct sunlight to light the scoreboards, giant display screens and parking areas, as well as to power up the restrooms, restaurants and other facilities.
So, how do commercial solar energy systems work? Much in the same way as solar panels for your home use work, panels are installed on the roof of a commercial building. Sunlight is converted into DC power by a solar panel. Then, DC power is converted into AC power through an inverter. Finally, the AC power travels to an electrical panel to power the facility.
Here we will look at five eco-friendly stadiums around the world.
Taiwan’s dragon-shaped solar stadium is 100% powered by the sun. The 55,000 seats stadium was built for the 2009 World Games. Its 14,155 square meter solar roof is installed with 8,844 solar panels that are used to power the 3,300 lights and two gigantic vision screens in the stadium. Any surplus energy would be sold to the community during non-game period. The stadium has also integrated other eco-friendly features such as permeable paving and all raw materials used in the construction were reusable and locally-made materials. Green spaces, sport parks, ecological pond and bicycle paths were built in the surrounding area.
The New Meadowlands Stadium in New York, which features 82,500 seats, has incorporated environmentally-friendly materials and practices in their construction and operations. The stadium participated in construction recycling program by reusing construction materials and sourcing their construction materials from the local marketplace. The reduction in the usage of sulphur diesel fuel and diesel particulate filters on all construction materials has resulted in lower emissions. A major feature of the stadium’s water conservation design is the use of synthetic turf instead of the more commonly found natural grass for the playing field, thus saving millions of gallons of water each year. The stadium also worked with vendor on building and maintaining alternative energy systems related to solar power and purchased power from alternative energy provides via the green power procurement programs.
China’s 40,000-seat Dalian Shide Stadium, also known as the Garden Stadium, was refurbished with green exterior walls that were covered in grass and plants to filter air pollution, reduce greenhouse gases, reduce energy use and provide adequate building insulation. The stadium roof is a flexible system of cables and lightweight fabric that protect spectators from the elements while providing natural light. Solar cells and wind turbine were installed into the inner walls, roof and the site to create energy sources. The porous site paving slows the rate of water run-off and allows for storm water infiltration. Water waste is significantly reduced with their holistic water recycling system which involves collecting and recycling water for irrigation, toilet flushing and air conditioning.
The 2012 Olympic Stadium in London has a flexible seating capacity between 25,000 (permanent lower tier) and 80,000, of which 55,000 seats on the temporary steel and concrete upper tier could be dismantled. The stadium was built using environmentally sound materials. The bowl which holds the lower tier was created using recycled 800,000 tons of soil. Compared with the 2008 Olympic stadium in Beijing which used 45,000 tons of steel, this stadium used significantly fewer tons of steel (11,000) to build the venue.
Arena Pernambuco, one of the stadiums to host matches during the 2014 FIFA World Cup in Brazil, will be built with a solar energy plant on-site to power the stadium. Approximately $13 million will be invested in the solar plant that will generate 1MW of installed capacity. The multipurpose arena will have 46,000 seats, 4,700 parking spaces, 2 giant resolution LED screens, 13 escalators, 42 bars with 356 points of sale and 71 restrooms. In addition, a university campus, indoor arena, hotel, convention centre, commercial, business and residential units will be built around the stadium.
Some sports stadiums have turned to solar power to brighten sports events held during the day and at night. Others have integrated sustainable features in their designs and operations. With investment in more advanced environmentally sustainable materials and technologies, we will see the next generation of sports stadiums hosting many eco-friendly sports events for eco-conscious sports fans.