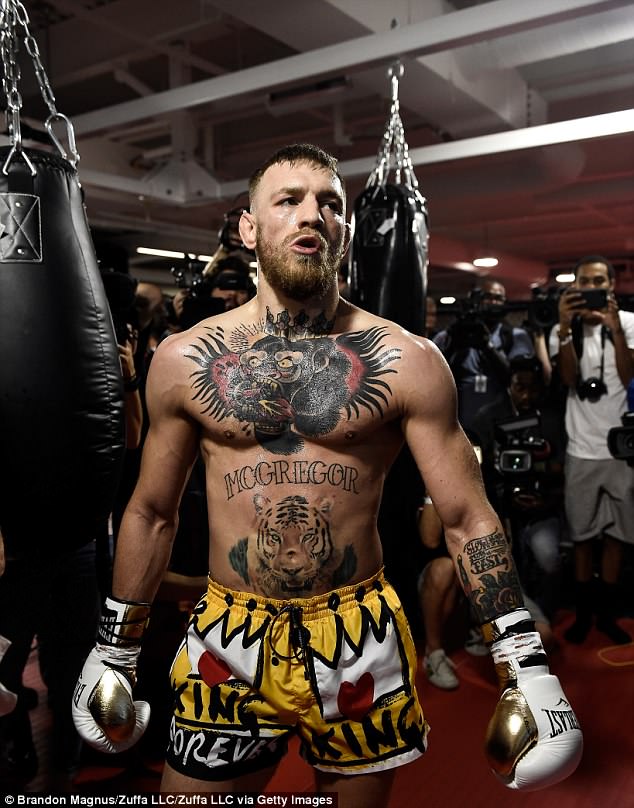 Who is Conor McGregor?

Conor McGregor is a well known Irish UFC  Fighting Champion. He has gained millions of fans across the globe with his bravado both outside and inside combat sports arenas.

Who is Conor McGregor, how old is he, when is his birthday, how tall is he and what is his background?

Born in Dublin, Ireland, in 1988, Conor McGregor rose from a tough neighborhood to become the biggest star in the sport of mixed martial arts (MMA).

After joining the Ultimate Fighting Championship (UFC) in 2013, “The Notorious” unified the featherweight division with his title win in 2015, and the following year he became a two-division champion by winning the lightweight title. McGregor also famously fought boxing champion Floyd Mayweather Jr. in 2017. He announced his retirement from MMA in March 2019.

The star’s passion for boxing began at the age of 12 when he began training at the Crumlin Boxing Club. In 2006, aged 17, McGregor and his family relocated to Lucan, Dublin, where he focused on his career and started a plumbing apprenticeship.

While in Lucan, McGregor met fellow Irish MMA hopeful, Tom Egan, and discovered the sport. He would train with Egan until his amateur debut on Saturday 17 February 2007.

What is Conor McGregor famous for and what is his occupation?

McGregor is a mixed martial artist, boxer, promoter and entrepreneur. The Irishman is famous for his post-fight antics, willingness to take on all comers, and utter belief that he can achieve anything he puts his mind to.

His most notable venture to date was his boxing match with Floyd Mayweather Jr. A lead up tour followed by the blockbuster event has forever cemented his fame with both MMA, boxing and popular culture circles.

What is Conor McGregor’s net worth?

As reported by Forbes, McGregor’s earnings from UFC purses in 2017 totalled £21million, as well as £5.5million in endorsement and sponsorship deals.

McGregor pocketed a minimum of £22.5million for his fight with Mayweather Jr, which brought his his net worth to £49million. Profits from the Mayweather Jr fight have been estimated at as much as £56million, but have not been fully reported.

Where is Conor McGregor from?

How much does he weigh?

McGregor currently fights at 155 pounds or 70.31kg. According to his coach, John Kavanagh, and McGregor himself, his weight when not fighting is approximately 170 pounds or 77.11kg.

Where does Conor McGregor live?

What and when were Conor McGregor’s most famous fights, and how much did he make from each of them?

Along with his fighting prowess and brash statements, McGregor is known for the numerous tattoos that adorn his body. He says he received his first tattoo of Arabic writing on his left heel at age 20 after a night of drinking. Otherwise, most of the ink has appeared since he moved to the UFC in 2013, including the large one on his chest of a gorilla wearing a crown and biting into a heart, and the tiger on his abdomen, between his last name and his nickname. McGregor also has a winged crucifix on the back of his neck, connected to a helix of thorns running down his spine, and a conglomeration of rose bushes, writing and human figures spread across his left forearm.

In April 2018, two days before the UFC 223 event at the Barclays Center in Brooklyn, New York, McGregor showed up with an entourage at the end of a media event and proceeded to wreak havoc, throwing a hand truck at a bus. The smashed glass injured some of the UFC fighters inside, two of whom saw their upcoming fights canceled as a result.

White, who called the incident the “most despicable thing in UFC history,” said the Irish fighter attempted to justify his actions via text by explaining the bad blood between his and Nurmagomedov’s camps. Turning himself in to the NYPD that night, McGregor was arrested and charged with three counts of assault and one count of criminal mischief.

In March 2019, McGregor was arrested on charges of strong-armed robbery and criminal mischief in Miami, Florida. According to the police report, the fighter slapped a phone out of a fan’s hand as they left a club and proceeded to walk away with it. McGregor was booked into a Miami-Dade jail later that day and released after posting bond.

How much does Conor McGregor earn?

McGregor earns approximately £2.6million per UFC fight, under the terms of his current contract.

Is Conor McGregor in a relationship, who has he dated?

McGregor is in a relationship with Dee Devlin. The two have been together since 2008 and on 5 May 2017, welcomed their first child, Conor Jack McGregor Jr.

What belts and awards does Conor McGregor have?

He currently holds the UFC Lightweight belt and has held the UFC Featherweight belt. The ‘Notorious’ is the first fighter in UFC history to hold titles in two divisions simultaneously.

McGregor has been named fighter of the year by numerous mixed martial arts publication: Bleacher Report (2015), ESPN (2015) and Sherdog (2015-17). He also claimed the award for International Fighter of the Year in 2014 and 2015 at the World MMA Awards, while also being named the Awards’ 2015 Fighter of the Year.

He was named one of Time Magazine’s 2017 Top 100 Most Influential People.

Who is Conor McGregor’s coach?

McGregor trains at SBG (Straight Blast Gym) in Dublin, Ireland. His head coach is John Kavanagh, who is the first native of Ireland to receive a Brazilian jiu-jitsu black belt.

How did Conor McGregor get discovered, how long has he been boxing for?

McGregor began his combat sports journey at the Crumlin Boxing Club in 2000 at the age of 12. He continued with boxing until his focus shifted to MMA at the age of 16.

UFC president Dana White travelled to Dublin, Ireland in February 2013 to receive an honorary award. At the time McGregor had recently captured the CWFC Featherweight and Lightweight titles.