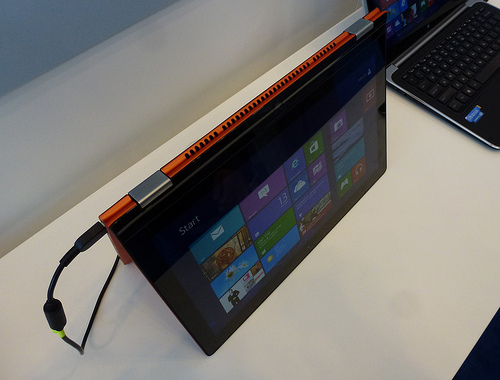 The laptop has firmly established its place in our lives as the go-to node for information technology consumption. Almost everyone has one and most of us could quite simply not function without it. However, Information Technology moves at a bewilderingly fast pace and we’re now seeing new devices challenging the laptop’s omnipresence. Some of these can even replace the majority of a laptop’s main functions if used correctly – particularly the latest generation of tablet computers and smartphones. Then, there are more exotic or specialised devices which are only useful in certain niches.
In the traditional computer sphere, the most obvious current challenger to the laptop comes from the so-called ultrabook, popularised by Intel, which is essentially a netbook that’s actually useful! Ultrabooks are designed to sport the reduced bulk and heightened portability of a sub-notebook-sized computer, but without the associated drop-off in performance that plagued earlier attempts to achieve this. Currently, the best ultrabook commercially available rivals traditional laptops in terms of specifications, but comes at a premium price due to its more advanced, compact technology ­– like solid-state drives. Considering the decline of the desktop PC market in the wake of the mobile revolution, it’s probably not too outlandish to claim that the ultrabook and its cousins represent the next stage in the PC’s evolution.
For those of us who do not require the sheer power of a laptop to fulfil our daily needs, a particularly powerful smartphone is often a viable alternative. The increased robustness of these devices, combined with their portability, makes smartphones a perfect choice if your daily computer use is limited to reading/writing and receiving and sending emails. This, however, comes at the price of drastically reduced capability.
Tablets and tablet-hybrids now also represent an increasingly popular alternative to the traditional laptop – particularly since Windows 8 is beginning to come into its own (widening the scope for competition between manufacturers). However, the recently-trumpeted notion that Windows 8 would be the final nail in the coffin of traditional computing has been greatly exaggerated. Tablets do, though, appeal immensely to those who are less technologically-minded, as their interfaces tend to be much more intuitive than traditional computers, relying almost exclusively on sensible touch-based interfaces. The remarkable ease with which they can be used was recently demonstrated when the charity One Laptop Per Child presented tablets to Ethiopian children with no experience of computers – they were able to deduce their workings with frankly astonishing speed. Tablets are a good option for older users too.
Be aware that upgrading your device too quickly may see you left behind: the PC market is currently undergoing rapid expansion as it remodels itself to fit recent innovations. When Windows 8 does finally find its feet, it is likely that Apple and Google will both respond with new iterations of their operating systems to bridge the gap between mobile and traditional computing. It might be a good idea to take some time to scope out future developments, before making a big new purchase.