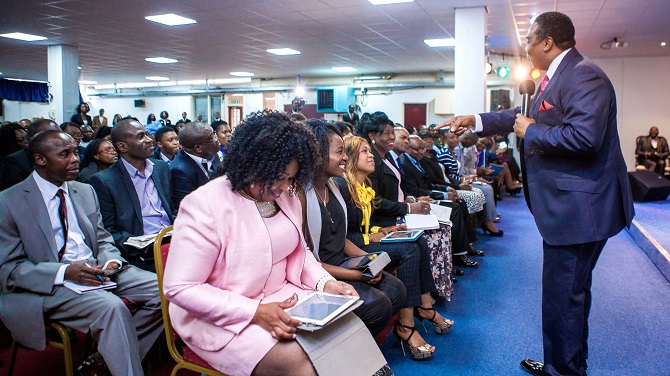 Christ embassy is a Christian denomination and is also called LoveWorld Incorporated. It is a global department that advocates the thought of taking God’s divine presence all over the world and portrays the character of Holy Spirit. This can be achieved through several means and resources available. This minSistry was formed by Pastor Chris in 1990 which now has become a wide global network with congregations taking place in many nations with more than millions of participants. The ministry continues to run three TV channels in Africa. One of them is LoveWorld TV.

As mentioned above, Christ embassy was founded by Pastor Chris Oyakhilome who has spent over 20 years to enlarge the ministry. Pastor Chris has helped millions in experiencing a purposeful life. Being a tutor, healing minister, television presenter and a best-selling author, he has devoted his life to promote his beliefs. He is the writer of Rhapsody of Realities which is a life-guide with rich teachings from the God’s world. This Bible study guide has been distributed in more than 200 countries and in over 800 languages. Pastor Chris preaches over largest congregations in Africa. He also established International School of Ministry to train gospel of Christ to empower them to convey the message of eternal life in Christ Jesus to their world. He has even developed the establishment of Inner City Mission of Christ Embassy which is a ministry to children living giving them hope and future.

As mentioned above, this is a Bible study guide which has been designed to enhance your spiritual growth and development. This guide will refresh and completely transform your regular experience of success and victory. Hundreds of millions of copies are distributed across the world. New languages are added regularly to make the devotional more accessible.

This is a healing ministry of Pastor Chris which brings divine healing to the nations. The healing sessions are hosted in various parts of Africa every year where hundreds receive healing in an environment of faith and presence of Holy Spirit. The inaugural sessions were held in Toronto, Canada in 2012. The sessions are attended by other visiting ministers around the world. Even the TV programme named ‘Enter the healing school with Pastor Chris’ is viewed by millions across the world receiving their healings and miracles while watching. Even the website offers online magazines and other resources to make the content widely available.

LoveWorld publication is the publishing house which works in collaboration with the network of churches. This publication published its first book in 1995 named ‘Recreating Your World’. It has published several books since its inception. Books are being published on several spiritual genres like prayer, faith, divine healing and health. As mentioned above, Rhapsody of Realities is the best-selling devotional. The publications have got a rich history providing it reader’s insights into the spiritual world. The immense devotion of Pastor Chris to the purpose has enabled many people to elevate in spiritual terms.