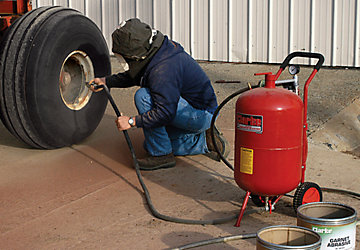 One of the most common industrial processes that is used in virtually every industry nowadays is abrasive blasting. It’s used in a variety of different business applications in businesses throughout Australia. Simply put, abrasive blasting is the process of propelling a narrow stream of abrasive material against any kind of a surface. Very high pressures are used when forcibly propelling the stream of abrasive material so it can be used to smooth down a rough surface. Abrasive blasting is commonly used for a variety of different reasons, such as smoothing out a rough surface, roughening a smooth surface, or shaping any kind of a surface. It is also most commonly used for removing contaminants from a particular kind of surface.

Abrasive blasting in Perth is offered by a number of different companies. If you want to get abrasive blasting done on any kind of surface, you will first need to call a local abrasive blasting company and get a quote. The process isn’t as simple as just picking up a hose and aiming it at the surface to be blasted. Instead, there are numerous variants used in the process, and a number of complications can arise. Here are a few things you should know about in terms of how the blasting process works.

The most abrasive process generally involves shot blasting (done with tiny metallic shots) or sand blasting (done using fine particles of sand). If you want moderate abrasive blasting done, you can also use glass beads or media blasting, which involves using corncobs or ground up walnut shells. An even milder version involves the use of soda blasting, which uses baking soda. There are also other processes which are minimally abrasive, and some which are completely non abrasive, such as ice blasting or dry ice blasting.

Abrasive blasting is generally done for a variety of different purposes. It offers a litany of different advantages you don’t get with surfaces that haven’t been properly blasted. For instance, abrasive blasting is one of the most common processes used for removing paint from any surface. It is the ideal choice since it doesn’t cause any sort of damage to the surface underneath. It’s also used for renovating sandstone buildings, especially since these buildings collect dirt and grime very quickly. With the passage of time, such surfaces become dirtier and often lose their original shine. Abrasive blasting could be used for removing the hardened dirt and grime on the surface and bringing it back into its original condition.

The technology used for soda blasting has improved considerably over the past few years. Nowadays there are new and improved methods and machines that professionals use for abrasive blasting purposes. Since the demand for such processes has increased considerably, more and more companies have begun to offer blasting services. Whether you want full-surface blasting done or would just like the paint removed from a particular surface, you can get a quote from a local company and get work started.