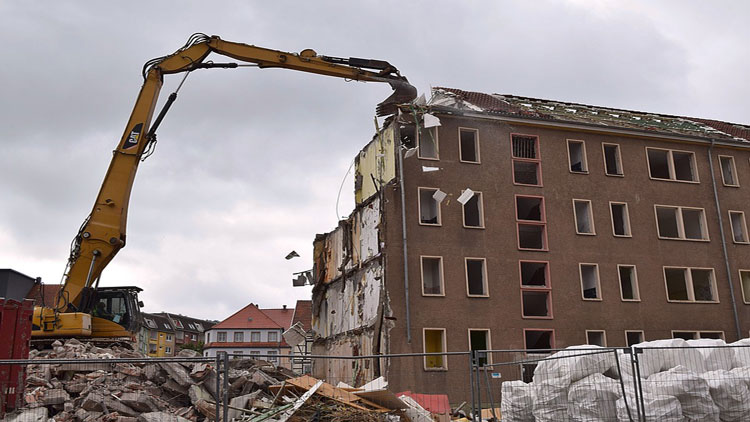 The excavator has been with us for many years, and performs invaluable tasks for a range of industries, including construction, mining, and many others. Early excavators were winch and pulley machines, and were quite limited in their movements, until hydraulics were developed, and this gave the excavator a new dimension.

The mechanism consists of a boom, dipper, bucket, and cab, all of which are attached to the base, or house, which sits on an undercarriage with tracks or wheels. The engine usually powers the hydraulic system using a series of hydraulic motors and pipes, and this provides the power required to dig, push, or lift. The complex level of controls allows for a skilled operator to do almost anything, and most units can swivel a full 360 degrees, which allows the machine to work in confined spaces.

This part of the excavator houses the engine and the swiveling mechanism, which is usually a cog that turns, thus spinning the house in the required direction. Most excavating machines have a caterpillar tracking system, which allows the machine to move through muddy terrain with ease. The steering system works by applying the brake to one of the tracks, and while the other track keeps powering, this causes the machine to slew, to the left or right, depending on which track is stopped. This braking effect is applied for a short time, just enough to change the direction of the machine.

Mono booms have no movement, apart from up and down, and the boom is attached to the stick, which gives the bucket the power to pull through the ground and fill the bucket. A knuckle boom can also move left or right, in line with the machine. The bucket is attached to the end of the stick and there is a wide range of sizes to accommodate all types of excavation. A bucket might be a wide attachment, which can also be used for levelling, or it might be narrow, which is ideal for digging trenches. Some buckets will have teeth to help break through tough ground, and these teeth are individually replaceable.

Modern excavators do a lot more than just dig, with attachments that enable the machine to break up concrete, or bore holes, making the excavator a very versatile machine that is used extensively in many industries. If you require an excavator for any reason, and you happen to be in Western Australia, excavator hire from RME offers an ideal solution, and with a range of machines available, there will be something just right. Earthmoving is one of the prime uses for excavators, and there are many different attachments to facilitate the work, and changing the attachments is a simple procedure that can be completed by the operator in a few minutes.

These workhorses are an integral part of many industries, and their development over the years has led to a safer working environment, and a more efficient way of excavating and moving earth.