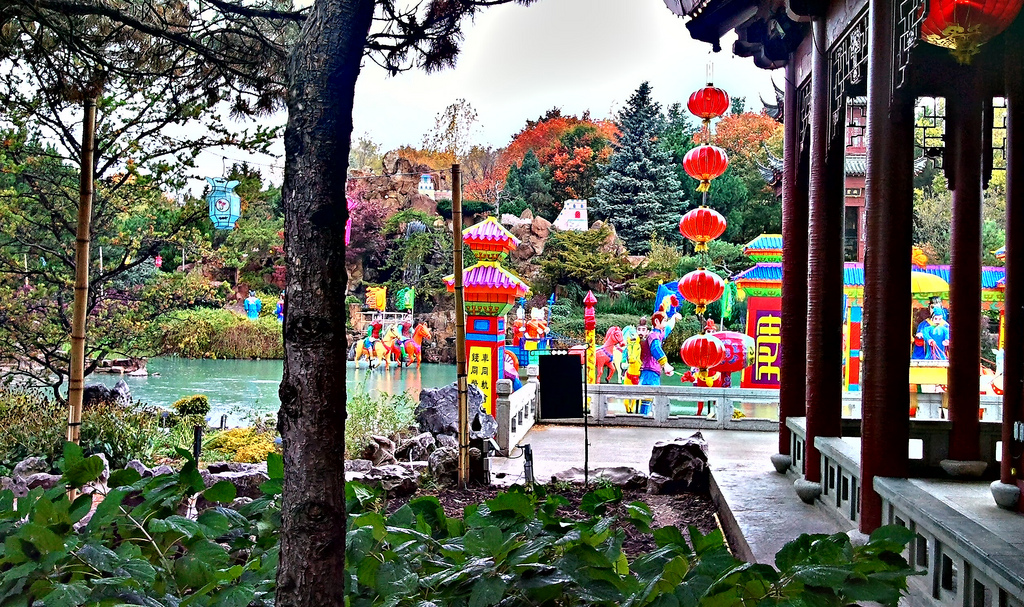 Montreal is the second most populous city in Canada. It is a high-stepping, modern city, where it is possible to find a lot of fun for all. However, if you are not a big fan of the noisy crowded placed, these two quiet spots in “the city of Mary” can definitely tickle your fancy!

It was opened in 1931, and today it is one of the most beautiful gardens in the world. In 2008, it officially became the National Historic Site of the country. It not only ornaments a city by the territory of ​​75 hectares near the Olympic Park. The Botanical Research Institute, which science researchers are taking care of the safety of more than 22 thousand plants’ species, is operating on the Garden base.

Since the climate of this region is quite severe (the coldest month’s temperature reaches minus 10 ° C, and the average annual temperature hardly exceeds + 6 ° C), the heat-loving plants from all continents are housed in ten permanently functioning greenhouses. The thirty thematic gardens are opened to the public only from May 15 to October 31. The most famous among them are the First Nations Garden, the Chinese Garden, the Alpine Garden, the Japanese Garden, the Garden of Poisonous Plants, and the Garden of Cultivated Plants.

This magnificent Botanical Garden is one of the largest in the world having an extended collection of various species and varieties.

The tourists, schoolchildren and students are examining, with a sincere interest, the death-dealing plants from all around the world and a rich bonsai collection of America’s largest Chinese garden. They are taking photos of a Japanese teahouse and of the deserted landscapes of Sonoran; visiting the garden of the endangered plants. Here, it is also possible to watch ducks, herons, squirrels, turtles within the regular European parks.

There is a splendid rosarium, an insectarium with the exotic insects. The Japanese garden is offering a collection of miniature bonsai trees, tea ceremonies and ikebana workshops. A Canadian garden is full of maples and birches. No matter the time of the year, the Botanical Garden is captivating the visitors with the wonderful aromas and colors of flowers from the different countries. Delighting in these flowers, you can see the peaceful oasis of the Japanese garden, to appreciate the classical French style, or to admire the wooded terrain of Laurentia. In summer, there is a chance to see the wedding ceremony in the garden.

The “Parc La Fontaine”, in the Le Plateau-Mont-Royal district of Montreal, is occupying the area of almost 40 hectares. This urban park, which is under the total ownership of the Montreal city, was named in honor of Sir Louis-Hippolyte Lafontaine, the first head of the Canadian responsible government. The park is having two linked ponds, waterfalls, the illuminated fountain in the north basin, tennis courts, the Calixa-Lavallée cultural center, the Adam Dollard des Ormeaux monument, the playing fields and the Théâtre de Verdure. For 50 years already, in the summertime, this theatre is offering free outdoor cultural programming.

In 1957-1989, on the territory of the park, there was also a “Garden of Wonders”. It was a small zoo with the domestic animals and some exotic animals (even the sea lions). The fountain and the monument to Louis-Hippolyte Lafontaine were erected in 1929.

After the beautification works in 1990, there is a new pathway, which takes the visitors to a lookout above the upper pool. The works of Michel Goulet could be observed at the second lookout.

The Lafontaine Park is not only one of the largest municipal parks in Montreal, it is also one of the most popular park among the outdoor enthusiasts and the people, who like to go in for sports. There is a whole network of walking and bicycle paths along the northern and the western edges of the park, and, of course, the opportunity to come to a picnic.

In summer, it is a real paradise for the sports fans: a kid’s pool, 14 tennis courts, a mini-football field, 5 baseball fields, 2 sand fields for volleyball and a children’s playground. In winter, you can skate in the park– there is a proper lighting and good music. In addition, you will be able to go on cross-country skiing or to play hockey with your friends on two hockey fields. Hire a car in Montreal and reach the places, described above, where you will be able to collect your thoughts and, at the same time, to admire the nature.