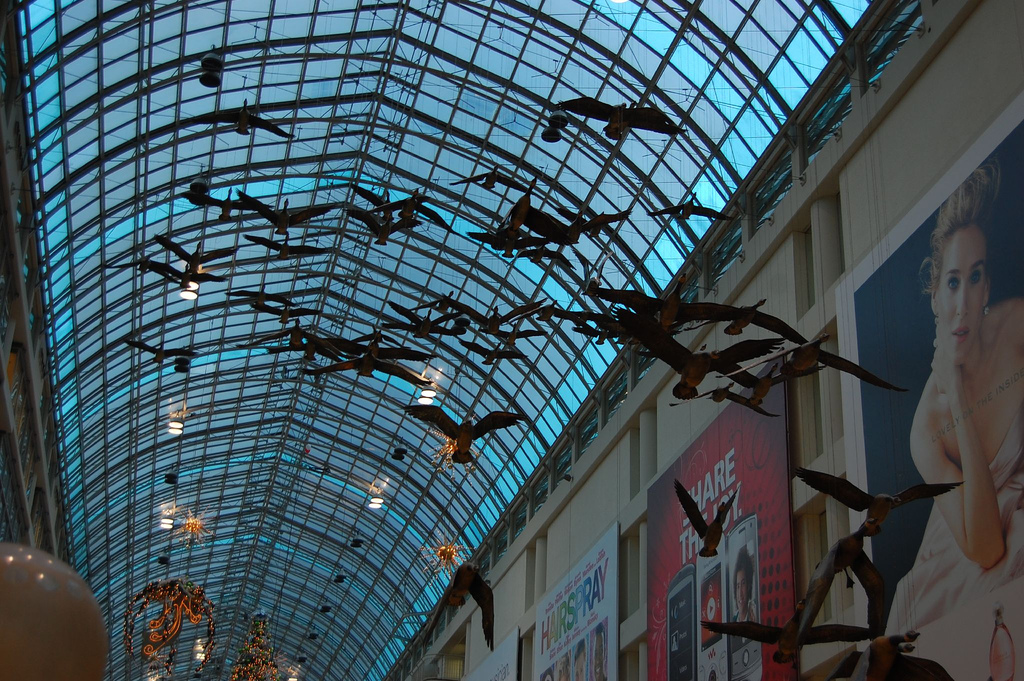 Toronto features a huge number of talented painters and sculptors whose works adorn the city. Some of them are favorites of the public, but others cause some doubts.

In any case, this TOP 10 is guaranteed to deserve your attention. We’ve prepared both official works recognized by the city authorities, as well as informal creations of local masters. So, check them out right now… 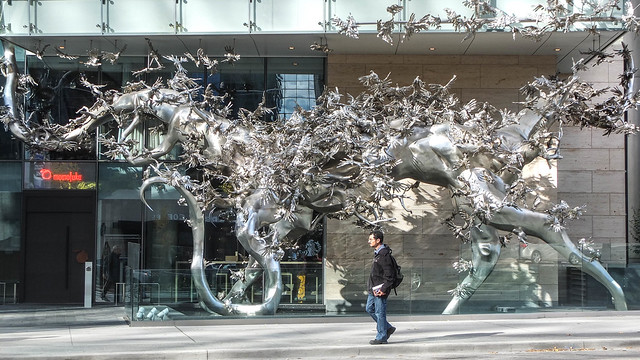 Living Shangri-La Toronto is not only the original combination of the hotel and condominium at University Avenue, but also the spot of location of the amazing art-creation called “Rising”.

The Shanghai author Zhang Huan decorated the building with an incredibly beautiful sculpture of stainless steel, consisting of two parts and representing a huge flock of birds. From the outside of the building, this masterpiece boasts of the impressive dimension: 21.98 m in length, 19.8 m in height and 4.8 m in width. The amazing sculpture harmoniously ‘breaks into’ the hotel’s lobby, which makes it even more impressive. 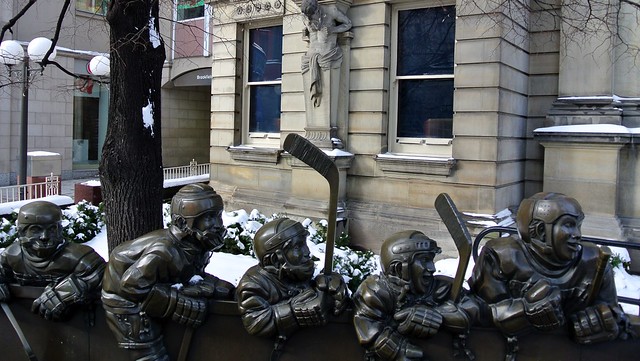 In 1993 the famous Hockey Hall of Fame pleased its visitors with a wonderful sculpture, installed right at the entrance to the Hall of Fame. The creation called “Our Game” was made by the Canadian sculptor Edie Parker. “Our Game” is a 17-foot bronze statue located near the intersection of Yonge and Front Streets. For millions of hall visitors, it embodies the symbol of the entire Canadian culture. 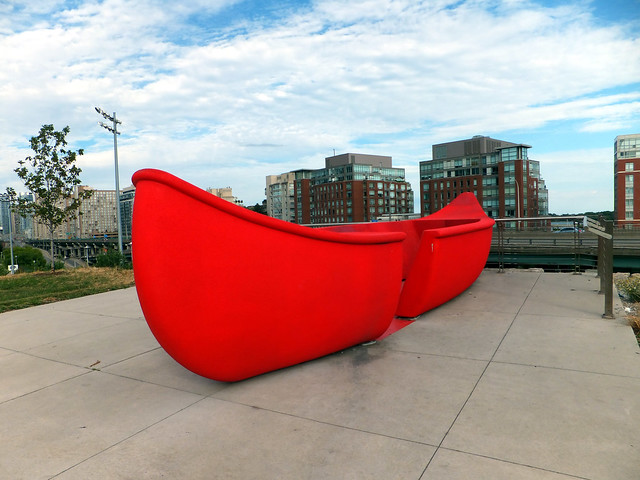 Situated in Canoe Landing Park near Spadina Avenue and Lake Shore Boulevard West, Tom Thomson’s Canoe was created by Douglas Coupland. In addition to canoe, this private park with the area of eight acres also offers a lot of other interesting exhibits for the connoisseurs of urban art. By the way, you can easily get in the canoe and admire the surrounding Toronto landscapes. Also, there are author’s ‘benches-icebergs’ and a colorful exhibition of floats. All these masterpieces belong to the authorship of Coupland.

The original creation of Stephen Cruise called “Uniform Measure/STACK” has undergone a number of modifications, although they were not conceived by the author. This incredible sculpture of a thimble with bright buttons was created in 1997. Then, nine years later, the local artist Victor Fraser added color and figures to the centimeter tape drawn around the art object. For eight years this “refinement” remained untouched until the city administration removed it – presumably, at the request of the sculptor. 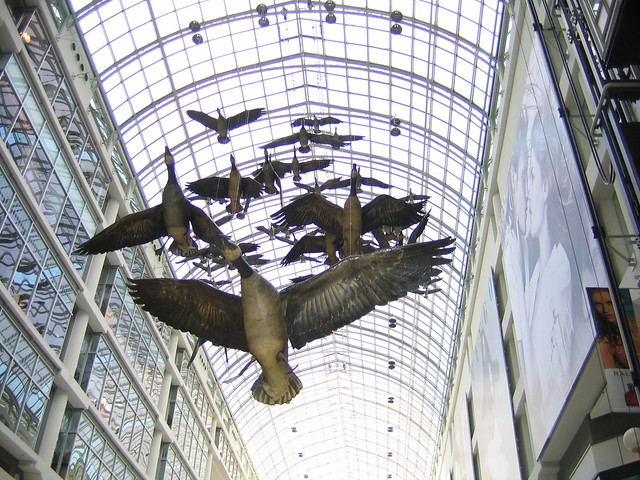 “Flight Stop” is a fascinating collection consisting of sixty figures of Canadian geese. The work was completed in 1979, and since then it has been located in the atrium of the Toronto Eaton Center on Queen Street.

This creation became the object of court proceedings, when in 1981 the shopping center decorated the neck of geese with red ribbons. However, the author has made an official ban on such changes, as they violate the integrity of the idea.

“The Audience” was made by Michael Snow. In 1989, the art creation was installed on the well-known Rogers Center. Sculptures, covering the north-east and north-west corners of the building, show a huge crowd of fans. According to the author, this work was inspired by the relationship between the fans of various hockey teams. 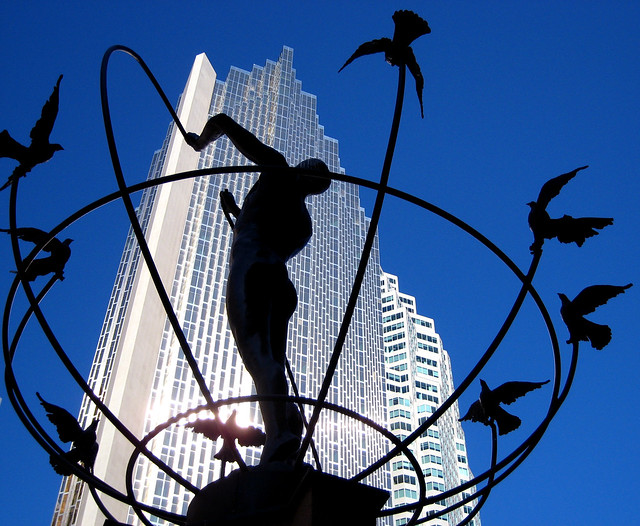 Toronto is known throughout the world for its multinationality and a huge number of all kinds of cultures. Therefore, this work reflects this idea in a colorful way.

“Monument to Multiculturalism” on Union Station was created by Francesco Perilli in 1985. The sculpture shows a man surrounded by pigeons and holding two meridians. By the way, similar works are located in South Africa, China, Bosnia and Australia.

Toronto’s Distillery district is home to numerous street art installations, and the most notable one is the steel arachnid called “I.T.”. It was created by Michael Christian.

In addition, this historical zone can boast of many other original creations, for example, “Still Dancing” from Dennis Openheim or often photographed installation of a love castle created by local artist Mathew Rosenblatt. 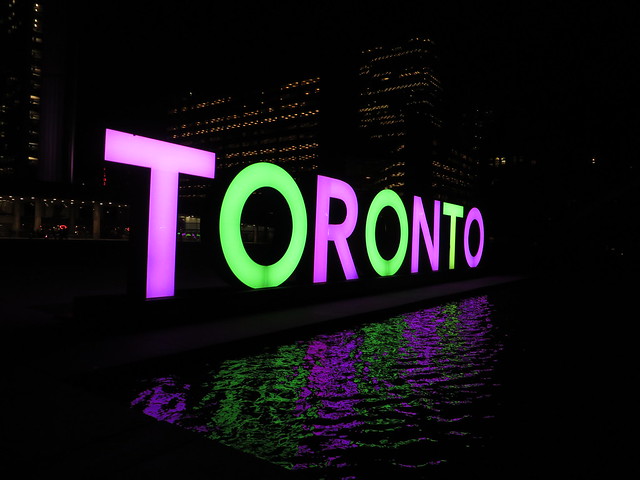 Presented to the public in 2015, this sign has become a favorite spot of locals and tourists. Its dimensions are very impressive – more than three meters in height and about 23 meters in length. The inscription can also boast of a serious weight: each letter weighs about 3000 pounds. Of course, the glowing 3D sign can create different color combinations, which looks fantastically beautiful in the evening. 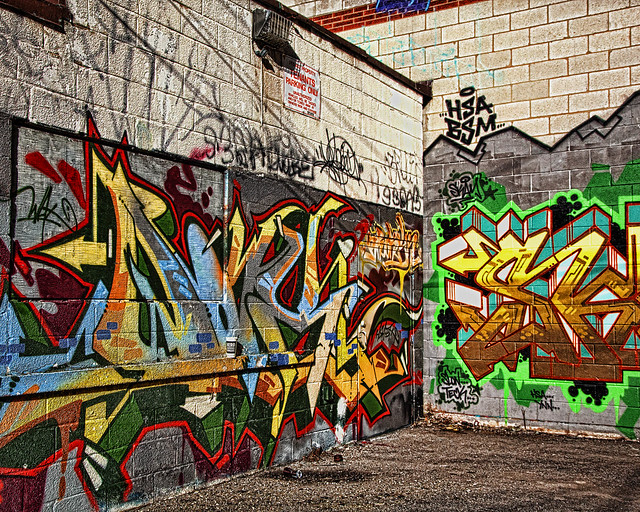 “Graffiti Alley” is a wonderful spot providing an excellent opportunity to get acquainted with various local artists who prefer to create new works on the walls of Toronto. Starting at Spadina in the south of Queen West, Graffiti Alley extends to Portland Street and features a variety of unique wall paintings of various genres and formats. This place has become so popular that now some agencies arrange tours around the area.

Summing it up, Toronto is a great destination for the fans of art. If you’re among them, don’t miss your chance to experience it. It’s recommended to use car rental Toronto for quick getting between these art-sights without wasting your time.