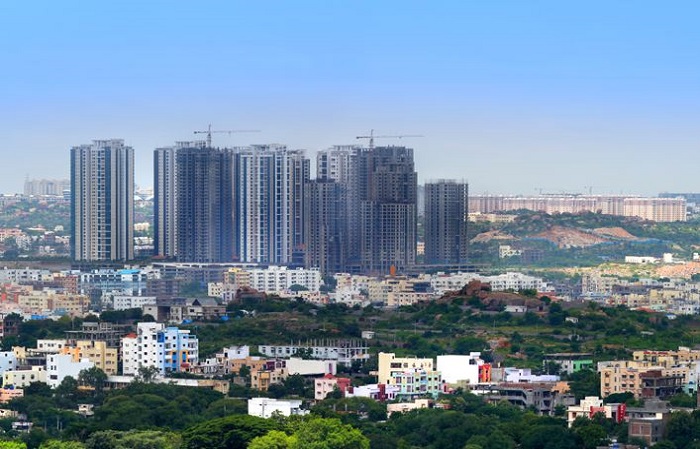 The city of Hyderabad perhaps has witnessed the biggest ups and downs in the property business. The city of Nizams has been the centre for attention for a long time and it continues to do so till date. However in the intervening period of twenty five years of development, the last half a decade has distinctly caused upheavals that were not anticipated earlier. The development of Hyderabad started in the nineties when the prevailing government decided that it was in the best interests of all involved to convert the city into a hub of IT and IT services. Land was acquired and what is popularly known as the Hi Tech city today came into being. Provisions were made to benefit the businesses settling here and soon the region had offices of some of the biggest firms in the world. Over the years, the city continued to be one of the biggest centres of property development. The IT industry that has spawned in Hyderabad is only second to Bangalore today. The demand for properties and flat for sale in Hyderabad has always been on the rise; although it has not quite managed to permeate the old Hyderabad city until now.
The rise and fall and rise of Hyderabad property
Till half a decade earlier, almost all the centre of attention of the property builders as well as investors was focussed on the new areas in the city. The better planned areas were hot property markets and they have remained the same over the years. However the new development decreases as one moves away from the IT zone.
However all that is changing now. The city is set to become the hub of companies dealing in defence research and services. The newer area of interest is evolving close to the Hyderabad airport. These are the areas which have been allocated for the new businesses to establish themselves. However before that the city has undergone a radical upheaval on the political front. For many years the property business had receded here because of the politically volatile situation. There was a demand for anew state and there was no clarity as to when that would happen. The builders as well as investors were not willing to take a risk in such a politically uncertain environment. Then the split finally happened in 2014. But even then the fate of the city was unclear. When Vijayawada was declared the capital of the new state, there was a shakedown in the property business in the city. Many builders left Hyderabad in favour of property development in Vijayawada. The demand for resale flats in Hyderabad however did not recede. This was because now there was no risk involved in property development in the city.
To Conclude-The road ahead
Over the years, the property development in Hyderabad has been concentrated only in certain parts. But now the market has opened up. Since the city is no longer the capital, there are only established builders left in the city. These builders are developing properties in the Hyderabad Secunderabad region. These properties include independent house for sale in Hyderabad as well as Secunderabad. The market of the twin city is still in nascent stage if the “IT zone” is not taken into account. And housing.com has established operations in the city.