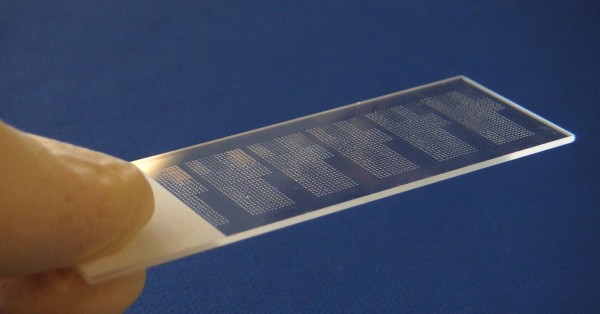 The implications of microarrays in medicine are incomprehensible. The studies from mid twentieth century were a turning point in microbiology with the discovery of the helix structure of DNA, its base of four chemicals residing on parallel phosphate and sugar rails holding the very information needed to create and sustain living organisms. The start of the twenty first century revealed the entire human gene sequence to be documented and stored in databanks. With the advancement in microarray technology, the possibility of simultaneous Gene Expression Profiling has become a reality.

With microscopic spots containing DNA attached to silicon or glass surfaces, DNA microarrays are complex chips also referred to as gene chips. Used for analyzing coding structures, gene chips provide to us the data that can be compared with the data existing in the gene databanks. The coding structure of the DNA obtained from a gene chip can also be referenced to observe differences and changes over time in the same person.

Independent of this knowledge, the idea of Psychosocial Genomics is fascinating on its own. It refers to the study conducted to conclude that both inner psychological and outside interactive social events affect gene expression. This is indicative of the brain to body connections that from the basis of hypnosis and clinical hypnotherapy. Most therapists are aware of the changes that take place at the neurotransmitter level in the patients’ bodies under clinical hypnotherapy. However, it is rare knowledge that hypnosis has a connection with protein synthesis and gene expression.

Investigations in gene expression with regards to hypnotherapeutic activity are known as Psychosocial Genomics. These examinations are aimed at identifying some measure for the changes that occur at the genome level through hypnosis. The studies have revealed that anti-inflammatory biological processes such as healing of the immune system as well as the balance of neurotransmitters, hormones and peptides that affect the emotional and mental state are enabled by gene expression.

If the study of psychosocial genomics is brought together with the possibilities of DNA microarrays, the implications extend into a whole new realm of research in psychotherapy. This idea is supported by a pilot study conducted by an extended use of DNA microarrays to study the changes that occur in gene expression at a molecular level after humans have a positive, creatively oriented experience.

This comprised of psychotherapy, hypnosis, meditation, rehabilitation as well as pastoral counseling to create a healing experience. The subjects were tested before, an hour after and 24 hours later. With the first test as a constant, the test for one hour of experience revealed changes in early response genes while 24 hours later, 77 genes had cascaded.

The pilot study has brought us to open up to the possibility of the role DNA microarray technology can play in the study of neural sciences and to further research for hypnotherapy, while supporting the claim of the benefits and effectiveness of hypnotherapy and psychosis. Thus, the development of microarrays has been of immense utility and further advancement promises to make quite a few breakthroughs in the field of medicine.

Amanda Hobbs has collected numerous cases in order to provide an in depth analysis of the studies conducted on the implications of microarrays. She recommends to this website to keep informed about the latest in DNA microarrays.