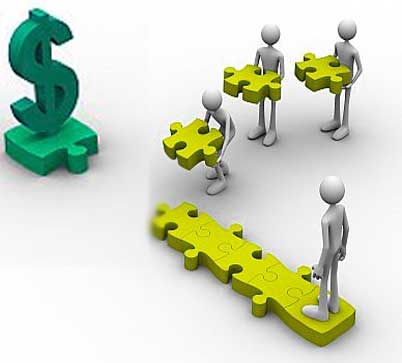 In the immortal words of Emmerson, “all I need is one idea” Overnight wealth has a certain stigma that “sensible” people seem to be resistant to. The idea of the get rich quick variety is an object of ridicule and derision in alot of peoples eyes. However, with a little focused action and the right knowledge, rapid wealth is not only possible for you, but inevitable for the determined.
The first thing I want to do is qualify the above by saying “quick” means several years not overnight. Sure, you could write a hit song or contemporary book but these have alot to do with chance. People with determination generally don’t like chance because control is a solid aspect of wealth generation.
Anyone can have an idea. By that I mean virtually any idea can become workable unless its just totally “out there” What matters is that you act. But more then that, before you act, you must know how to make it work. Thats really what most people with a good idea lack.
So knowledge again is where the central workability comes from. So let me give you some knowledge right now. The knowledge of the wealthy. There are many ways to get rich very rapidly but I offer you an example below and some insights about what the wealthy know and have known for centuries.
Arbitrage is a concept that you should learn more about. Its a word that circulates in financial circles and is therefore obscured to the average person as just some odd french word that the stock market people use.
The truth is that arbitrage is the single biggest idea about wealth that you should understand. Doing an arbitrage deal is literally this……..If I offered you 70 cents for your crisp clean dollar note would you take the deal? What if you had $100,000 and I had $75,000 and I said look, let me deposit this money into your account in exchange for your money? Straight swap. How would you feel about that?
Well I imagine you’d say no. I wouldn’t blame you, its hardly a fair deal. Arbitraguers do this all day long. But this is the difference.
We deal in value and perceptions not numerical currency like cash. Or we deal wholesale and sell retail. There are hundreds of ways that I can swap my 70 cents for somebody elses dollar.
The wealthy have practiced arbitrage for as long as currency existed because arbitrage is the secret road to wealth. A secret that will never be openly talked about because it is so tightly held. My little contribution here will do nothing to change that balance, but consider yourself fortunate to learn about this and maybe it will spurr you on to a new life.
Here is a real world example of arbitrage that I practiced many years ago, when I was starting out broke, dejected, but hopeful.
It wasnt long ago but seems like centuries ago. Its pre-history now. One form of arbitrage is the concept of economies of scale. This arbitrage strategy relies on a single fact. An irrefutable reality about fiscal life on the planet earth. Here it is. When you buy something (of anything) in bulk, you are entitled to and more often then not get a very large discount on your purchase. When this bulk amount is “split up” and re-sold in traditional more popular chunks, your investment will return a decent profit.
So here is a get rich quick idea. One you can use right now to establish an income stream to replace your daily job. It can be reproduced and systemized to manufacture a very healthy income indeed.
When you look at newspaper and local journal price lists, you will notice they are very yielding to this concept of economies of scale. Simply a small ad may cost $140 for example. But buy a full page and you only pay say $900. Why? because its less work for the publication. Well my idea was to start a weekly page called “Martins Market” I approached 200 business owners face to face and told them they can get a small ad in my one page spread “Martins Market” for just $90 a full $50 cheaper then if they bought their ad from the paper directly. Do you think this offer interested a good percentage of the business owners I approached? You bet! Not only that, but they got a further discount if they paid up 6 months in advance.
I could fit 40 ads of that size onto my page. Being filled up, I made $3600 every week for an outlay of $900 for the page. I added value with nice graphics and the page got quite well recieved as my clients reported good returns from their ads. This was reproduced 20 times around the country, with 2 sales staff for every “Martins Market” I was netting close to $20,000 per week for a fairly lengthy period.
You will need a few dollars to try this, but its inevitable that if you do your research properly you can make this work and get exactly the same results.
My very best to you
Martin Thomas CEO opportunity investor.com