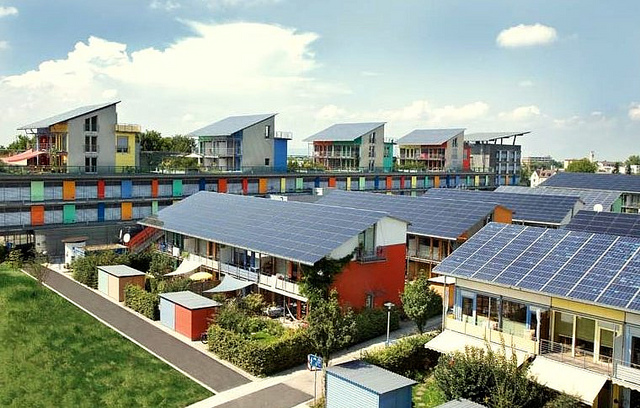 For many, living in a city that is free from pollution, haze and air congestion may seem to be a fantasy. Yet, while many cities still suffer from high levels of air pollution, others have emerged as leaders in environmental sustainability and renewal. This article will explore cities around the world that have taken on the challenge of sustainability without sacrificing modern convenience.

Rizhao in northern China, aptly named the City of Sunshine, is a city that runs primarily on solar power. Not only do the majority of households in the city center use solar water heaters, but the street lights and traffic indicators also run on power generated by solar cells. Solar panels for homes are also quite common on both private houses and public buildings. Additionally, farmer’s costs are reduced by the use of thousands of greenhouses heated by solar panels, a key factor in a largely agricultural area.

The city of Rizhao was able to become a leader in the solar power movement because of government subsidies for research and development, as well as public relations campaigns used to spread knowledge and awareness about solar power possibilities. Additionally, city law mandates that all new buildings must incorporate solar panels in order to keep with the goals of the community.  The negligible use of fossil fuels in Rizhao and the unique façade of the city have made it into a tourist hub as well as one of the highest ranked Chinese cities for air quality.

The Passive Houses of Freiburg

The city of Freiburg Im Breisgau in southwest Germany is famous for its ancient university and medieval architecture – as well for its adoption of progressive, environmentally friendly policies. In Freiburg, environmentally aware practices include the building of ‘passive houses,’ where super insulated and triple-glazed houses are heated by a series of warm and cold ducts from fresh air that is sucked through a funnel. These passive houses repurpose energy and heat in such a way that energy waste is a miniscule percentage compared to the waste found in typical homes. While the number of people living in these passive houses is relatively small, most residents of Freiburg join into the eco-friendly lifestyle by having solar panels for homes, undertaking diligent recycling and riding bikes to work.

Many cities are trying to make themselves as energy efficient as possible while faced with buildings built long before energy-efficiency was a goal. There is also an emerging trend of planned communities incorporating specific energy goals from their onset.  The Babcock Ranch in southwest Florida is a 17,000-acre planned community being developed in conjunction with the state of Florida and the real estate firm Kitson & Partners. Babcock Ranch is slated to be the first fully solar-powered city in the United States, with the largest solar power station in the world as well as a network of solar panels. Babcock Ranch will also include a smart grid system that allows residents to monitor and control their energy consumption. The city will include a photovoltaic solar plant and a nature preserve for camping and hiking.

With climate change fears growing, there is a comfort in knowing that there are practical steps communities can take to impact this important facet of shared human responsibility. From newly build communities that employ ‘passive houses’ or smart grids to private citizens who choose to install solar panels, role models in energy sustainability can be found around the globe. The important challenge remains to implement these changes on a wider scale in order to lead to lasting change.