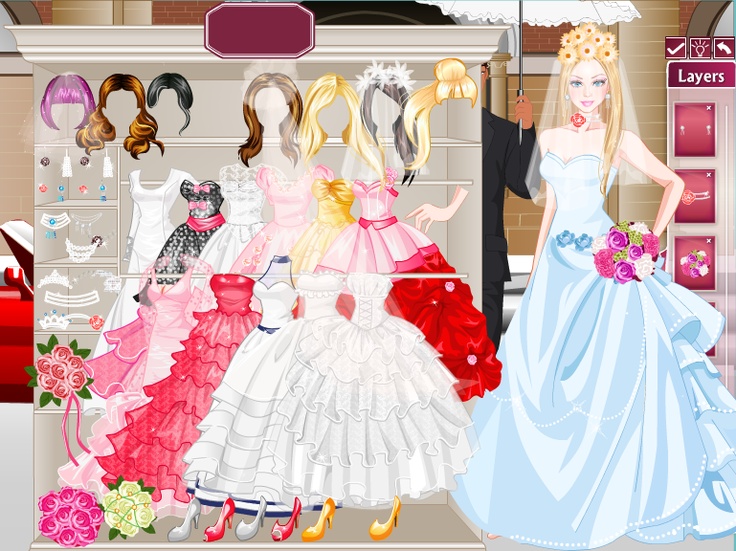 A bridal shower is a great opportunity for the bride’s female friends and family to meet and mingle with the ladies on the groom’s side. It’s a slightly more upscale and formal gathering than the bachelorette party, so the traditional bachelorette party games (you know, like pin the–well, you know–on the–well, you can imagine) won’t fly in this setting. Nevertheless, it’s good to plan a few ice=breaking games to get the party going. Here are a few party games you can play to make sure everyone has fun without Aunt Gertrude getting offended.

Let your party guests get in touch with their inner fashion designer with this fun game. Each team picks a model and crafts a haute couture bridal gown for her — using nothing but scotch tape and several rolls of toilet paper. At the end of the game, have a fashion show and let the bride judge the winner.

When you greet guests at the door, give each of them a bracelet (one of those skinny metal bracelets made to wear a dozen at a time) and a list of words that the guests aren’t allowed to say (make them related to the shower, like “bride” and “dress” and “groom”). If someone hears another guest say a forbidden word, she gets to take the rule-breaker’s bracelet. Whoever has the most bracelets at the end wins.

Visit a website where you can design and print your own bingo cards, and make a set of cards for the guests with gifts you normally see at a bridal shower–bakeware, stainless steel kitchen appliance, lingerie, gift card, etc. That way the guests have something to do during the gift-opening besides go, “oh, a toaster.” Whenever a guest gets a bingo, reward them with a prize.

Drop a cheapie ring into your batter as you make cupcakes before the shower. Then have each guest pick a cupcake to decorate, and let the bride choose the best decorated. You can even pick up some sparklers for weddings to make the decorations even more spectacular since they can be used indoors where your party is likely to take place. Then, just before the guests bite into the cupcakes, let them know there’s a ring in one of them, and whoever finds the ring is the next one to be married!

Bridal showers can be a little awkward to begin with, as social circles that don’t normally mix interact for the first time. Party games may seem cheesy, but they’re a good way to break the ice and get everyone talking.