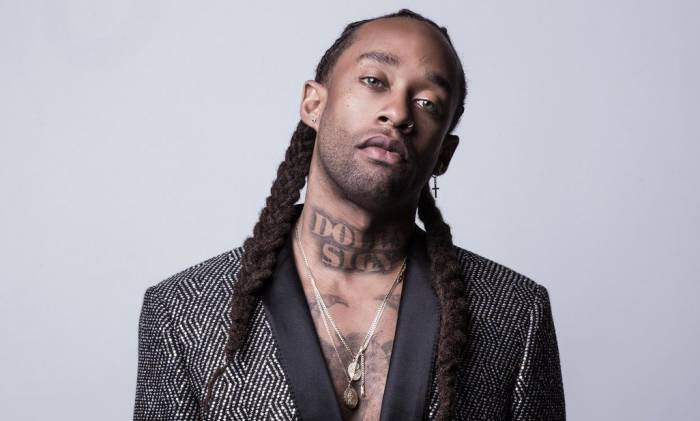 Tyrone William Griffin Jr. (born April 13, 1985), known professionally as Ty Dolla Sign (Ty Dolla $ign or Ty$), is an American singer, songwriter, rapper, and record producer. He first gained major recognition in 2010 for his feature on YG’s “Toot It and Boot It”, which he had written and produced for Def Jam Recordings.

In the summer of 2013, he signed a record deal with Wiz Khalifa’s Taylor Gang Records. In November 2015, he released his debut studio album, Free TC, which peaked at number 14 on the US Billboard 200.

Ty Dolla Sign is perhaps best known for his singles “Paranoid“, “Or Nah“, and “Blasé”, as well as his writing contributions to “Loyal“, “Post to Be“, “FourFiveSeconds”, and “Psycho”, which went number one in June 2018 on the Billboard Hot 100, being his first.

Ty Dolla Sign was born Tyrone William Griffin, Jr. on April 13, 1985, in Los Angeles, California. He has said that through his father’s involvement in the band Lakeside, he met bands like Earth, Wind & Fire and Prince as a child, which led to his love and interest for soul music.

Ty Dolla Sign has a daughter named Jailynn. He has been in a relationship with American singer Lauren Jauregui since February 2017.

Ty Dolla Sign is the son of musician Tyrone Griffin, a member of the band Lakeside.
Ty Dolla Sign began his music career by learning how to play the bass guitar and later learned how to play drums, guitars, keyboards, and the MPC.

The duo also made guest appearances on studio albums by other artists such as Sa-Ra Creative Partners and Black Milk. They also sang on songs such as “U”, which was featured on the latter 2007’s recording Popular Demand. Eventually, however, the partners had a falling out related to these ventures.

After the dispute, Ty Dolla Sign would go on to collaborate with Los Angeles-based rapper YG. Ty Dolla Sign’s initial claim to fame was through the success of YG’s single “Toot It and Boot It”, a song he both wrote and produced with YG. He then became affiliated with YG’s group Pu$haz Ink.

In 2011, Ty Dolla Sign released his first solo song, titled “All Star” featuring Joe Moses, and produced by Fuego. Ty Dolla Sign then released “My Cabana”, featuring Young Jeezy, which was ranked on Complex’s Best 50 Songs of 2012 list at number 23.

Ty Dolla Sign sings and raps, combining elements of hip hop music and contemporary R&B. When asked if he was a rapper, he stated, “People would call it rap, but I really don’t feel like I rap. There’s so many great rappers, like if we had to battle or some shit, they would just cream me. I don’t really consider myself a rapper, I just happen to have bars, or something like that. I still sing man, I’m a singer, ya feel me?”

His net worth is estimated at $ 3 Million.

When asked about his influences, Ty Dolla Sign responded, “2Pac is my favorite artist of all time. I liked Slum Village a lot back then, like J Dilla, he’s one of my favorite producers and artists. I’m like a hip-hop head type of dude.

Mos Def, Talib Kweli, that whole Rawkus Records scene, that’s my type of shit.” He continued, “I also like cats like Prince. Just like his production, he’s kind of like the same thing as me. He sings, he produces, he plays all types of instruments.

That’s what I’m after. I wouldn’t wear that type of clothes or wear my hair like that. [Laughs.] But as far as artistry, that’s the same type of dude I am.”in an interview he revealed that Kim Burrell was his absolute favourite vocalist, and that Brandy was right there with her.