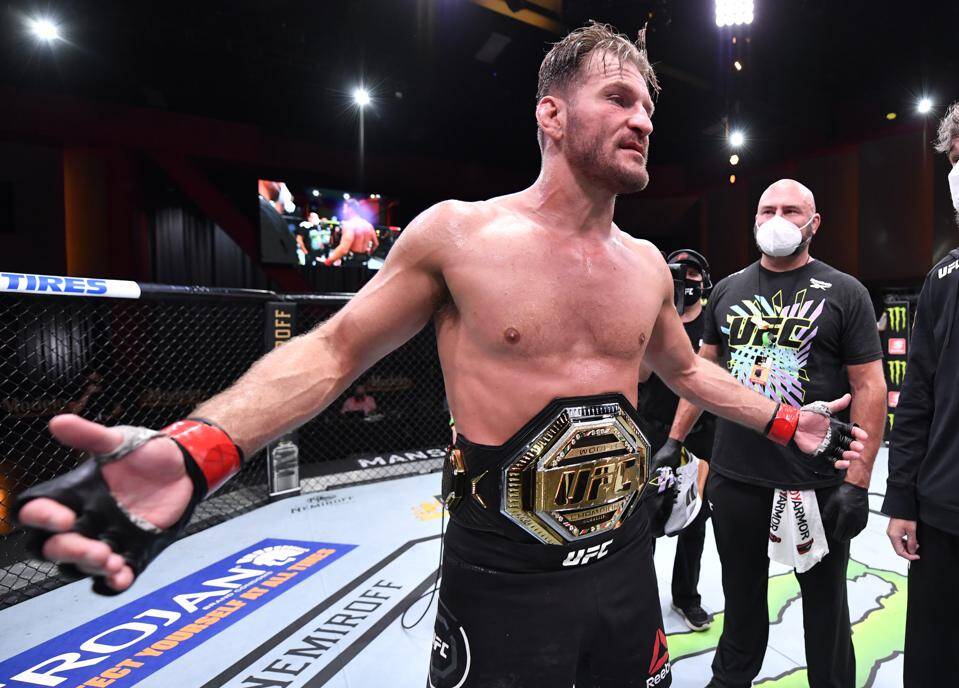 Who is Stipe Miocic?

Stipe Miocic is an professional American MMA fighter presently signed under the UFC (Ultimate Fighting Championship). Born and brought up in Ohio, Stipe was always a curious kid interested in different kinds of sports he was exposed to. Coming from a middle class family, he didn’t receive any privileges of doing what he wanted to do in his life, and that’s why making a career in sports was a farfetched dream for him.

Nevertheless, talent makes its own way and Stipe found himself competing in MMA in 2011 with the Ultimate Fighting Championship, the biggest MMA platform. Starting his career with a local Ohio promotion, he won his first five fights cleanly with knockouts.

Everything went well and he then went on to become the NAAFS World Heavyweight Champion. In his debut UFC game against his opponent Joey Beltran, he won via anonymous decision and this was just the beginning. Stipe went on to have a very successful career at UFC and received several honours such as ‘Performance of the Night’, ‘Fight of the Night’ and ‘Knockout of the Night’. He is currently the reigning ‘UFC Heavyweight Champion’ and ranked #4 in his weight category.

Stipe Miocic was born into a middle class Croatian family in Ohio, USA on August 19, 1982. Despite the fact that the family lived in difficult, there was no dearth of necessities when Stipe was growing up and both his parents worked to provide their kids with a better lifestyle.

When he was 3 years old, his parents divorced and his father went back to Croatia. His mother never remarried and as a result, Stipe always remained close to her emotionally and still regards her as the ‘biggest inspiration of his life’.

Stipe later said in interviews that he has seen his mother working hard to earn money, to provide the family with food, clothes and medicines on time. That is one of the reasons for Stipe idolizing his mother even now, and he gives her all the credit for whatever success he has achieved in his life.

Stipe studied in the Eastlake North High School and was a massive fan of almost all the sports his school teams played such as baseball, basketball, football and wrestling, with baseball being his favourite. With practice, he got very good at the sport, and when he went to college in the Cleveland State University, some teams playing in the major leagues approached him to play for them.

During all this time, he wrestled a bit, but not with the intention of making it big in the sport some day. He just did it for fun and when his coach asked him to be a regular at the gym where they were training, Stipe didn’t show much interest and once the college was over, he started taking paramedic classes with the goal of becoming a fire-fighter.

Although Stipe managed to brush off all the thoughts of a career in wrestling, he did become a ‘Cleveland Golden Glove Boxing Champion’ and a Division I wrestler at the NCAA and eventually, he made it to the ring fighting in the pro MMA matches, where he began with a success streak.

In the first five matches of his MMA career, which he fought locally, he won all the matches in style, knocking out most of his opponents.

This infused in Stipe Miocic a strong surge of confidence and he started taking MMA seriously and got signed on by an Ohio based MMA promotion, NAAFS and although he was relatively inexperienced, he went on to win the ‘NAAFS Heavyweight Championship’ within months of starting with the promotion. This was a sure shot way of getting UFC officials’ attention, which he got in mid-2011.

After signing the deal with UFC in June 2011, Stipe had his very first fight scheduled for October 2011 and his opponent was Joey Beltran. Stipe trained hard for the fight and it paid off perfectly as Stipe stole a victory via anonymous decision in a very close encounter.

His second UFC fight pitted him against a much stronger opponent Phil De Fries and was scheduled for February 2012. Phil couldn’t stand in the ring for long and as Stipe rained his heavy punches on him, he got knocked out in the first round itself. Stipe went home that night with his first UFC bonus in form of ‘Knockout of the Night’ award.

A newcomer Shane Del Rosario was chosen his next opponent, and it wasn’t very hard for Stipe to grab one more victory and the fight was over in the second round with Shane getting knocked out by Stipe. The next fight turned out to be a déjà vu experience for Stipe, the only difference being, he was taking the beating this time around.

Stefan Struve knocked Stipe out in the second round, but the intensity with which the fight was fought, compelled the judges to award both the fighters with a ‘Fight of the Night’ honour.

In his next two fights, against Roy Nelson and Gabriel Gonzaga, Stipe won both times, via anonymous decisions and in a May 2014 fight against Fabio Daldonado, Stipe rained punches after punches on his opponent, and won the contest in the first round, in just a matter of a few minutes. He also received the ‘Performance of the Night’ bonus for that fight.

Junior dos Santos, who pulled out of previous fight with Stipe due to injury, was his opponent for the last fight of the year in December 2014. They both fought hard and fast, and the match turned into a nail biter by the end of it, and despite fighting like a true champion, Stipe lost the match. But the fight became memorable and Stipe was consoled with a ‘Fight of the Night’ honour, which he shared with his opponent.

The next fight was luckier for Stipe, as not only emerged victorious but also set a UFC record. In the May 2015 fight against Mark Hunt, which was largely a one-sided contest, Stipe didn’t give enough chances to his opponent, and won the fight with a record strike score of 361-48.

In January 2016, Stipe faced Andrei Arlowski and registered an easy win, which earned him the ‘Performance of the Night’ honour once again.
Fabricio Werdum was his next opponent, who was also the reigning ‘UFC Heavyweight champion’ and Stipe defeated him in a May 2016 match and won the title. It was Fabricio’s first defeat since 2011 and earned Stipe one more ‘Performance of the Night’ award.

In the next two matches that Stipe contested, he successfully defended his title against Alistair Overeem in September 2016 and against Junior des Santos in May 2016. And on both occasions, Stipe went home with two additional bonuses; ‘Fight of the Night’ for the former one and a ‘Performance of the Night’ for the latter.

Apart from wrestling, Stipe Miocic works as a fire-fighter and a paramedic in his hometown of Ohio. He says that he makes lot of money from MMA, but he is not able to leave the fire-fighting job because helping people makes him feel good on a personal level. According to him, it also helps him in the ring.
Stipe is married to Ryan Marie Carney. The couple got married on 18th June 2016.

Stipe Miocic has an estimated net worth of $3 million in 2020, including all of his properties and earning. Being a professional MMA fighter, he doesn’t receive a fixed salary instead gets paid for each match.