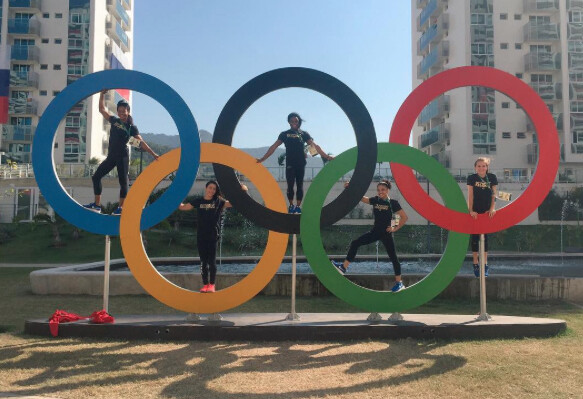 Who Is Simone Biles?

Born in Ohio in 1997, Simone Biles has become one of America’s top gymnasts. After dominating at the junior elite level, she won her first U.S. and world all-around titles in 2013. In 2015, she claimed a record third straight world all-around title. She went on to lead the U.S. Olympic women’s gymnastics team, nicknamed “The Final Five,” to win gold at the 2016 Summer Games, and dominated the competition, winning gold in the women’s individual all-around, vault and floor exercise and bronze in the balance beam. With 19 Olympic and World Championship medals, she is the most decorated American gymnast.

Born on March 14, 1997, in Columbus, Ohio, gymnast Simone Biles has emerged as a champion in her sport. She and her sister, Adria, were raised by their grandfather Ron and grandmother Nellie, after their mother’s struggle with substance abuse problem.

Ron and Nellie eventually officially adopted the two girls, and Biles calls her grandmother “Mom.” Nellie has been a constant source of support through Biles’s rise in the world of competitive athletics; as the gymnast told CNN, “She encourages me and never lets me feel down about something for too long.”

Biles discovered her abilities at an early age. According to the official USA Gymnastics website, she visited a gymnastics center on a field trip with her day care group, noting, “While there I imitated the other gymnasts, and Coach Ronnie noticed. The gym sent home a letter requesting that I join tumbling or gymnastics.” Very soon, Biles was on her way to developing those natural gifts.

Simone Biles began competing as a level 8 gymnast in 2007, and by 2011 she had cemented her standing at the junior elite level. That year, she took the top spot in the vault and balance beam events and finished third in the all-around at the American Classic. She followed with an impressive series of showings in 2012, winning the vault and the all-around events at the American Classic, the Alamo Classic, the Houston National Invitational and the Secret U.S. Classic.

Biles soon emerged as a force to be reckoned with at the senior elite level, bursting into the spotlight as the all-around winner at the 2013 U.S. P&G Championships. Also that year, she delivered a historic showing at the World Championships by becoming the first female African-American athlete to win gold in the all-around. As she explained to The Hollywood Reporter, this impressive victory likely served as an example to other young gymnasts: “I think it inspires a lot of the little girls out there to go in the gym and train harder,” she said.

Biles continued to build on her successes in 2014, again taking the U.S. and world titles in the all-around competition. She also won gold in the vault, floor exercise, balance beam and all-around at the Secret U.S. Classic that same year. During her floor routines, Biles often executed what has become her signature move: a double-flip with a half-twist.

In 2015, Biles became the first woman to win her third consecutive world all-around title, giving her a record 10 gold medals at the international competition. Considered one of the country’s top Olympic hopefuls, she then resumed training for Rio 2016 at World Champions Centre, which is owned by her family, in Spring, Texas.

In July 2016, Biles wowed gymnastics fans with an impressive performance, winning the all-around title and first in the floor exercise and vault. She earned a spot on the 2016 Olympic team along with fellow gymnasts Laurie Hernandez, Aly Raisman, Gabby Douglas, and Madison Kocian.

On August 9, 2016, Biles led the U.S. women’s gymnastics team to win the gold. She earned an impressive 15.933 in the vault, a 15.3 on balance beam, and 15.8 for a crowd-pleasing floor routine in which she performed “the Biles,” her signature move comprised of a double layout with a half twist. The powerhouse gymnast shared the victory with Raisman, Douglas, Hernandez and Kocian, a team which calls themselves “The Final Five.”

Raisman explained the meaning behind the team nickname on the Today Show: “We’re the Final Five because this is [coach] Marta [Karolyi’s] last Olympics and without her none of this would have been possible . . .We wanted to do it for her just because she’s there with us every single day.”

She added: “This is the last Olympics where there’s a five-girl team. The next Olympics is only going to be a four-person team.”

The Final Five are the third American women’s gymnastic team to win gold, following team victories in 1996 and 2012. After taking the team gold, Biles tweeted “dreams DO come true” and a photo of the U.S. team on the medal podium.

Biles continued to dominate the Olympic competition, winning the women’s individual all-around gold medal. U.S. teammate Aly Raisman and Russian gymnast Aliya Mustafina won silver and bronze, respectively. What made Biles’ victory truly historical was that she achieved a 2.1 margin of victory over Raisman — a lead that was larger than any gymnast from 1980 to 2012 combined. She also became the first woman in two decades to win back-to-back Olympic all-around and world titles.

She went on to win gold again in the women’s individual vault competition with a score of 15.966, but faltered in the individual balance beam event. In a rare stumble, Biles fought to maintain her balance, scoring 14.733, which earned her the bronze medal. Teammate Laurie Hernandez landed the silver medal, and Sanne Wevers of the Netherlands won gold. “The rest of the routine was still pretty good,” Biles said, according to USA Today, “so I can’t be too disappointed in myself.”

Biles continued her Olympic run in the individual floor exercise, taking the gold in a brilliant performance, which incorporated her signature move “the Biles,” a double layout with a half-twist and blind landing. With a score of 15.966, Biles earned her fourth gold medal in Rio.

Biles joined only three other gymnasts who have won four gold medals in a single Olympic Games — Larisa Latynina of the Soviet Union in 1956, Vera Caslavska of Czechoslovakia in 1968 and Ecaterina Szabo of Romania in 1984. Biles’s teammate Raisman took the silver in the floor exercise and Amy Tinkler of Great Britain won bronze.

With 19 Olympic and World Championship medals, Biles made history as the most decorated American gymnast.

‘Dancing with the Stars’

In 2017, Biles joined the cast of the 24th season of Dancing with the Stars, on which she was paired with pro Sasha Farber. Despite impressing the judges with her moves, the Olympic champion was eliminated during the semifinals in May.

In January 2018, Biles revealed on Twitter that she was one of the many young women who had been molested by former USA Gymnastics team doctor Larry Nassar.

“Please believe me when I say it was a lot harder to first speak those words out loud than it is now to put them on paper,” she wrote. “For too long I’ve asked myself, ‘Was I too naive? Was it my fault?’ I now know the answers to those questions. No. No, it was not my fault. No, I will not and should not carry the guilt that belongs to Larry Nassar, USAG, and others.”

After taking much of 2017 off, Biles returned to intensive training and resumed her place at the top of her sport. In August 2018, she swept all four events at the U.S. Gymnastics Championships to win the competition by a whopping 6.55 points and become the first woman to claim five national all-around titles.

Simone Biles made history by becoming the first gymnast to ever attempt and land a double-twisting, double somersault dismount off the balance beam, according to Team USA. It’s jaw-dropping.

Ranges from $2.4 million to $2.5 million according to US Today. Her real name is Simone Arianne Biles. She’s an American artistic gymnast.