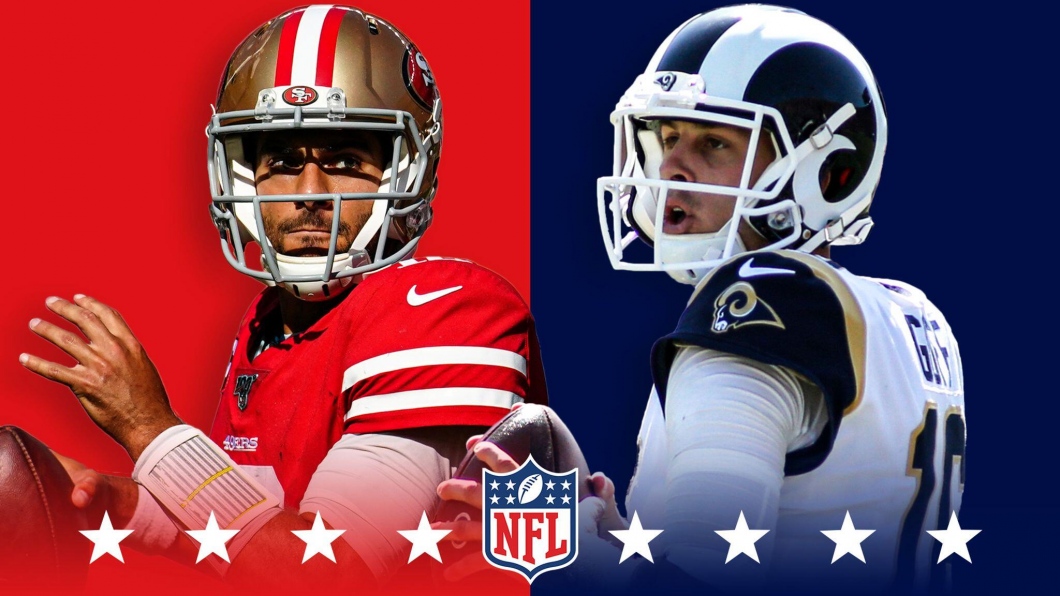 It started as a back-and-forth affair between the San Francisco 49ers and Los Angeles Rams at the Coliseum in Los Angeles, but both defenses soon took over. One defense stood out above the other — the now borderline elite San Francisco defense led by a vicious pass rush. The 49ers defeated the Rams 20-7 in Week 6 thanks in large part to the defense.

The 49ers defense finished the game with four sacks. Rams quarterback Jared Goff was limited to just 78 passing yards on 24 attempts — a 3.3 yards per attempt average.

The Rams were able to move the ball on the ground with four individual rushers combining for 109 rushing yards and a touchdown on 22 carries (5.0 yards per carry), but Los Angeles went 0-for-4 on fourth down conversion attempts to go along with a turnover.

This 49ers are now 5-0 for the first time since 1990 and Jimmy Garoppolo improved to 13-2 as an NFL starter — he is just the ninth quarterback in NFL history to win 13 of his first 15 starts.

Why the 49ers won

Another dominant defensive performance was the difference in this game as has been the case all year for San Francisco. The 49ers have yet to allow more than 20 points in a single game and have now kept opponents in the single digits in two of their five victories.

In this game, the Rams were consistently shut down following their opening possession touchdown. The 49ers committed to stopping the Rams’ run game after their first scoring series and Goff, head coach Sean McVay, and an array of talented wide receivers had no answer.

Another huge stop as the defense holds the Rams on 4th & 1 ?#BeatLA pic.twitter.com/WTd0t99BTz

Why the Rams lost

Going into the game, Los Angeles’ secondary had been torched in consecutive games. The Seahawks and Buccaneers combined for 85 points against the Rams in Weeks 4 and 5. The secondary was not the issue in Week 6. Instead, an anemic passing game on offense was the issue.

Goff averaged 3.3 yards per pass attempt, and although the offensive line deserves its fair share of the blame (4.0 sacks allowed), the highly-paid quarterback missed tight end Gerald Everett when he was four steps ahead of the coverage on a would-be touchdown to give Los Angeles a chance in the fourth quarter. It was one of several throws Goff missed during the day — his accuracy has been off all season.

This game turned in the third quarter when Goff mishandled a pitch play and it resulted in a lost fumble inside the Rams’ own 17-yard line. Just four plays later, Jimmy Garoppolo kept the ball for a 1-yard touchdown run on third and goal. On their next possession, after forcing another Rams punt, the 49ers led a 12-play, 50-yard field goal drive to give them a 10-point lead they would only add onto later in the second half.

Play of the Game

With the Rams moving the ball to the midfield point, down just 13 points and only a few minutes into the fourth quarter, the 49ers came up with a massive stop on 4th-and-1. The 49ers defense got incredible penetration into the Rams’ backfield all game — both against the pass and the run. On this play, the Rams never really had a chance thanks to an emerging elite defensive front for San Francisco.

Quote of the Game

Let’s be honest, James has a point.

The Rams have struggled to find a home-field advantage since relocating to Los Angeles.

The 49ers (5-0) will travel to the east coast to play the Washington Redskins (1-5) who are coming off their first victory of the season against the lowly Miami Dolphins. The Rams (3-3) will also travel east to play the Atlanta Falcons (1-5).

see also : Just in – Millions of People Are Watching ‘Fortnite’ Ahead Of ‘Chapter 2’