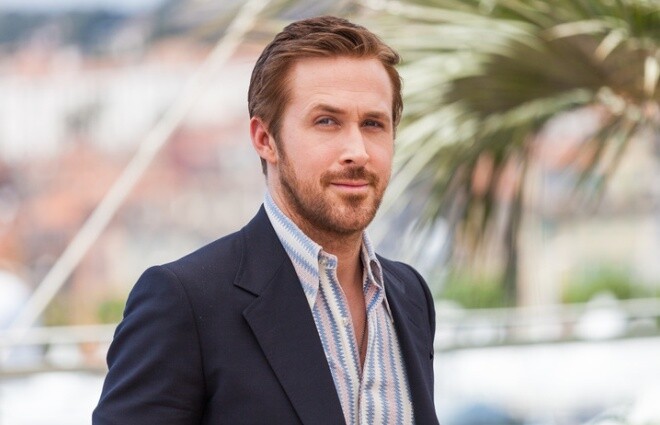 Who is Ryan Gosling?

Ryan Gosling is a professional Canadian movie actor. He became famous for his participation in the “The Notebook” and shootings in the Oscar-winning musical “La La Land”. The actor is often called “the most romantic hero of the present times”.

Ryan Gosling was born in the town of London (Province of Ontario, Canada). Thomas and Donna Gosling are Ryan’s parents. Also, the movie star has an elder sister Mandi.

Soon after the birth of the son, the family of Gosling moved to Cornwall where Ryan attended comprehensive school. There he discovered his abilities in the fine arts, the boy took part in school theatrical performances, but at the same time the child didn’t get on with the peers. Ryan constantly was a participant in fights and scuffles. Therefore from the 5th form, his parents transferred the boy for homeschooling and his mother controlled his fulfillment of the test tasks.

Later the family moved to Burlington. Lester B. Pearson High School became the next educational institution of the future celebrity.

When Ryan turned 13 years old, he went to a casting of the well-known in Canada and in the USA talent show “Mickey Mouse’s Club”. Having demonstrated his vocal skills, Ryan became the participant of this TV program in which he had been taking part for 2 years. Then he acted in the movies and programs of the “Disney” channel. Ryan Gosling played his first role in the series in the children fantasy’s style “Young Hercules”. Also, young actor played in youth series about teenagers “Heartbreak High”.

But these roles were only little or episodic. Gosling thought of specialized studies which would help him to improve his acting skills, but the actor became successful even without professional education.

After several supporting roles Gosling was invited by the producer Daniel Diamond to play the leading role in the movie “Believer”. Ryan played the character of Danny Balint, the guy of the Jewish origin which became one of the leaders of the skinheads’ movement. The movie was released in 2001 and received a great number of enthusiastic comments and awards, including the Sundance Film Festival award. And at Moscow International Film Festival not only the movie was noted, but also Ryan Gosling’s acting, for which he awarded the prize of the Golden St. George for Best Actor.

Ryan became world-famous after his biographic movie “The Notebook” which was directed by the novel written by Nicholas Sparks. The story of the relations of the young man and the girl from different social groups touched American audience, the movie was called the best in the creative biography of the Canadian actor, and Gosling’s photo appeared on the covers of the major movie magazines of the planet.

The actor had his next triumph after the drama movie “Half Nelson” had come out, in which Ryan played the character of the school History teacher who didn’t imagine his life without drugs. The movie received enthusiastic feedback from critics, and the “Paste” magazine put this movie at the 16th place in the list of “50 Best Movies of the decade”. As a result, Ryan Gosling was nominated for Academic Awards for Best Actor.

In 2011 the movie “Drive” was released. The picture was a screen-adaptation of the novel by James Sallis, and Ryan played the leading role in this thriller. Despite brilliant acting of the actor the movie was more appreciated for the script than for the direction.

“The Place Beyond the Pines” is one more movie featuring Gosling. The crime drama which came out on the screens in 2013 became popular in the USA. The world movie press positively met this picture and particularly marked the script which touched upon the issues of family, paternity, and destiny.

In 2014 Ryan Gosling tried himself in his new quality. In the movie “Lost River” (in other translation – “How to catch the monster”) the Canadian actor participated as a director, scriptwriter, and producer. This non-commercial art-house project was demonstrated by the authors at Cannes Film Festival.

Ryan Gosling is a creative person who loves experiments. Already being at the peak of his glory, the young man learned to play the guitar and the piano himself. But this was not enough for him and later together with Zach Shields, Ryan Gosling created the “Dead Man’s Bones” band. The band focused on Halloween songs; witches, ghosts, zombies, monsters, and skeletons – were constant characters in the group’s lyrics.

Guys experimented in the studio trying to record a new song. As a result, the composition “In The Room Where You Sleep” was recorded. Later the single was posted for free download on the web and also the video on this track was published.

Collaborative art impressed Ryan and Zach so much that young people recorded 11 more songs and released an album “Dead Man’s Bones” at the end of 2009. And then they went on a tour to the USA practically without having rehearsals. In each city, they employed local children’s choir to sing background vocals and improvised right during their performance. To warm up the public before performances Gosling and Shields held contests of children’s talents or staged puppet shows.

In 2016 the movie “La La Land” was released, in which the Canadian actor Ryan Gosling played Sebastian Wilder. This picture received positive feedback from the movie critics, and the movie was called the best picture by the end of the year.

Mia Dolan (her character was performed by Emma Stone) dreams to become an actress, but at present, the girl serves coffee to the movie stars and has auditions all over town. Sebastian is a jazz musician who has to play plain melodies at the parties. In future, the couple will have to make their choice between their fragile relations and career of which they have been dreaming. This is another one love story of the starlet and fanatical jazz musician presented by the director Damien Chazelle has become to the viewers’ taste.

The Canadian mass media reported more than once that this star duet might not have happened at all, cause Emma Stone rejected Mia’s role because of her employment in the shootings in the movie “Beauty and the Beast”, and Ryan Gosling refused the role of the Beast in the same movie to appear in “La La Land”. It was supposed that at the initial stage Miles Teller, who had worked with Damien Chazelle in the project “Whiplash” and British movie actress Emma Watson would play the leading roles.

It is known that Ryan Gosling took lessons of playing the piano and learned music by heart. According to the composer Justin Hurwitz, Gosling could play all parties shown in the movie without the stand-in and any special effects.

This picture was worth taking these efforts. The movie would be called one of the best movies in 2016. “La La Land” was presented in 14 nominations at the 89th Academy Awards ceremony. The picture set a record by the quantity of the nominations along with the movies “Titanic” and “All about Eve”.

The actor is not as simple as it seems at first sight. Ryan chooses the pictures in which he is going to take part, rather thoroughly, according to his own preferences and beliefs. The movie actor believes in prophetic dreams, he likes magicians and prefers loneliness, he plays in the music band and looks forward to the old ages. Creativity may seem impossible in such mixture of various, melancholic moods and extraordinary occupations, but the children divert the actor from depression and his various problems.

Tall and handsome (Ryan is 185 cm high) Gosling always was popular at women. Ryan was in romantic relations with several popular ladies. Ryan’s relations with his partner in the movie “Murder by Numbers” – Sandra Bullock lasted for more than a year. Much longer, during four years the Canadian actor had a relationship with the actress Rachel McAdams with whom they performed together in the movie “The Notebook”. It was going to engagement, but in 2008 the couple finally broke up.

After that, the actor had love affairs with the actresses Famke Janssen and Jamie Murray. The actor had relations with each of them for about a year.

In 2011 Ryan got acquainted with the actress Eva Mendes. The couple began to live in a civil marriage, and in 2014 they gave birth to their daughter Esmeralda Amada Gosling. In 2016 their second daughter Amada Lee Gosling was born.

The users of Instagram and other social networks continue to monitor actor’s creative career and private life. In 2017 in the Canadian press there was published information that Ryan Gosling and Eva Mendes separated because of the actor’s love affair with the actress Emma Stone – his partner in the movie “La La Land”, but such messages weren’t true. Soon Ryan and Eva appeared in public together.

Ryan Gosling becomes more and more popular. Constantly the actor receives offers from the Hollywood directors to take part in their movies.

In March of 2017 the melodrama featuring Gosling under the title “Song to Song” was presented, and in October there took place the premiere of the fantastic movie “Blade Runner 2049”. The last picture is rather unusual for the repertoire of the Canadian actor, earlier Ryan didn’t appear in the movies of such genre and was playing roles in melodramas.

In April of 2017, there was information in the press that Ryan Gosling had supported the movie “The Promise” in which it is told about the Armenian genocide and also within the premiere Ryan Gosling joined the campaign #KeepThePromise. The plot of the picture is developed in the years of World War I when the extermination of the Christian ethnic Armenian population living in the territory of the Ottoman Empire was carried out.

The movie “The Promise” was created with financial support of the American billionaire of the Armenian origin Kirk Kerkorian. The author of the picture is the director of the movie “Hotel Rwanda” Terry George, and the leading roles were played by Oscar Isaac, Christian Bale, and Charlotte Le Bon.

Earlier the prominent representatives of the world show business, such as Leonardo DiCaprio, George Clooney, Sylvester Stallone, Elton John, Barbra Streisand and others expressed their admiration of the picture. The support campaign is taking off and more and more world celebrities join it.

Besides that, in April of 2017, the actor posted a video message in his account on Twitter, in which he expressed his assistance to the protection of human rights in Congo. In the nearest future, the Canadian actor will also participate in other campaigns of this sort.

Academy Awards ceremony is the major event in the world cinematography. In 2017 the global media attention was drawn at the actors who performed the main roles in the movie “La La Land” – to Ryan Gosling and Emma Stone.

Actors have already managed to receive a great number of movie awards for their brilliant acting, but this time the movie has been presented to 14 nominations at once, in the 6 of which the movie has become the winner.

In 2016 Ryan Gosling together with Russell Crowe participated in the shootings of the comedy “The Nice Guys”, but such star cooperation was remembered by the joint videos of the actors. The videos in which celebrities visit psychological counseling for the couples experiencing a crisis in the relations appeared on the web.

The actors admit that after collaboration they can’t stand each other, and the psychotherapist who has been appointed by the movie studio tries to figure out the reasons for this antipathy. Soon 4 videos about Gosling and Crowe’s problems came out on the web: “Stress-management”, “Confrontation”, “We build walls” and “Travel”. Authors of the movie have tried to draw audience’s attention to the movie with the help of such videos.