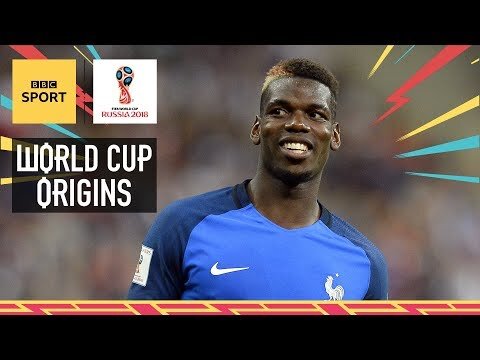 Paul Pogba is a professional footballer who represents France National Team. Currently, he plays for the English Premier League giant Manchester United as an attacking midfielder. Previously, Pogba had played for Italian side Juventus and also won four consecutive Serie A titles and reached the 2015 UEFA Champions League Final as well with the club.

Furthermore, the Frenchman also won the FIFA World Cup Best Young Player award in 2014 and FIFA U-20 World Cup Golden Ball in 2013. In addition, he was recently named UEFA Europa League Player of the Season for the 2016-2017 season.

Paul Pogba was born to Guinean parents on March 15, 1993, in  Lagny-sur-Marne, Seine-et-Marne, France. From the beginning of his childhood, he was extremely talented in football.

At the age of six, Pogba started to play for US Roissy-en-Brie and later joined Le Havre. Furthermore, he began to play football alongside his elder brothers Florentin and Mathias. Concerning in his education, there is not any information regarding it.

The Frenchman has been in a couple of relationships. Recently, during his holiday in LA, Pogba was spotted with a blonde beauty several times. Pogba has also taken her on a date at Hollywood Bistro TAO. However, he doesn’t confirm their relationship. Furthermore, he also had an affair with Justin Bieber’s ex-girlfriend Chantel Jeffries.

Moreover, the couple was seen several times in the public. In addition, Chantel also traveled from London to Manchester to meet the midfielder. She also posted a video of Paul Pogba on her Instagram. Besides this, the star midfielder was also in a relationship with the African beauty ‘Dencia’. They spent many times at the Lowry Hotel. Although, there is not any information regarding their relationship. Currently, Pogba is single.

Pogba began his professional career with Le Havre. Later in 2009, he made a move to English Premier League club Manchester United youth academy. However, it was not the easy decision of him as there was a contract between him and Le Havre. Although, the midfielder decided to leave the club to join United.

On 10 October 2009, Pogba made his under-18 team debut and netted seven goals in 21 appearances. Furthermore, he made his professional Premier League debut for Manchester United against Stoke City on 31 January 2012. He appeared in three senior matches for the club.

On 3 July 2012, Pogba left Manchester United and joined Italian side Juventus signing four years contract. As a debutant, he made his first appearance for the club against Benfica on 1 August 2012. Furthermore, Pogba played a key role in a 4–0 win over Lazio to lift the 2013 Italian Supercoppa.

As a skilled and talented midfielder, he became the 2013’s Golden Boy for the best young player in Europe. In the 2014-15 season with Juventus, the attacking midfielder played 51 matches and scored nine goals winning the second consecutive Serie A title.

After the 2015-16 season, Pogba reunited to Manchester United as the world’s expensive transfer fee of €105 million. As a Manchester United player, Pogba made his debut in a 2–0 home win over Southampton on 19 August 2016. The Frenchman netted his debut goal against the defending champion Leicester City on 24 September.

At the club, he has shared the pitch with the United legend Wayne Rooney. In addition, he also scored in the final of Europa League final against AFC Ajax to lift the UEFA Europa League. So far, the midfielder has smashed 11 goals in 55 appearances for the club. Furthermore, Pogba was the main man behind the transfer of Romelu Lukaku.

As an international player, Pogba made his senior national team debut in a 2014 World Cup qualifier against Georgia. His first international goal came against Belarus on 10 September 2013. In the tournament, he was named tournament’s Best Young Player. Furthermore, Pogba earned his name for UEFA Euro 2016. In addition, he managed to score his second goal for the national side in the quarter-final match against Iceland.

With his professional football career and various endorsements, Pogba bags a massive amount of money. So far, he has endorsed with many big brands which also include sports giant brand Adidas. Currently, Pogba is earning $215,264 as a weekly salary and has a net worth of $60 million.

So far, Pogba has won many awards and honors in his football career. As an individual, the Frenchman has won FIFA U-20 World Cup Golden Ball award in 2013 and FIFA World Cup Best Young Player award in 2014. In addition, Pogba has also Bravo Award and UEFA Europa League Player of the Season award recently.

However, Pogba’s agent Mino Raiola took Twitter and states, “Here Comes the Sun, playing over it. Glad The Sun thinks Paul is THAT good but in fact, the story made up. Suits their trademark, not surprised.” Besides this, after thrashing the world record transfer, Pogba was heavily criticized for his game at the first season at the Manchester United. He just managed to net nine goals in 51 matches.

Pogba has an athletic body with a towering height of 6ft 3 inches and weighs 84 kg. Furthermore, he has black hair and dark dark brown eyes.

Paul Pogba is hugely active on social media such as Instagram, Facebook, and Twitter. He regularly posts photos and updates in his social accounts. Furthermore, he has a massive fan following on Instagram with over 29.8 million followers and around 7 .29million followers on Facebook. On Twitter, he has more than 6.02 million followers.