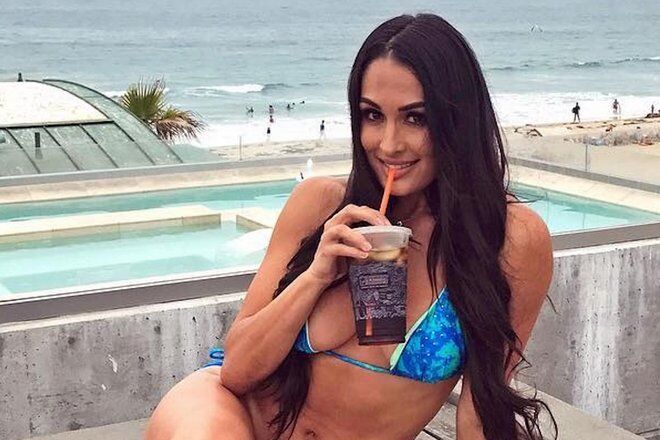 Who is Nikki Bella?

Stephanie Nicole Garcia-Colace professionally known as Nikki Bella is an American Unique semi-retired professional wrestler, was born on November 21, 1983, 16 minutes earlier than her twin sister Brianna Monique. The girls were born in San Diego, California, and grew up on a farm in Scottsdale, Arizona. Their parents’ names were Jon Garcia and Kathy Colace.

As a primary school student, Nicole was fond of soccer and played in a local children’s team. In 2002, when she finished Chaparral High School, the young woman continued to train at Grossmont College, San Diego. She dreamed of becoming a professional soccer player, but a leg trauma prevented these plans from coming true.

Nikki quitted college. Together with her sister, she moved to Los Angeles to start a show-business career. Nicole was looking for agents and got hired at Mondrian Hotel as a waitress.

Soon, promoters noticed the women and invited them to Fox Meet My Folks reality show broadcast on the national TV. Later, the twins appeared in the advertising campaign for Budweiser, the sponsor of the World Cup: they posed for many photos including the pictures with the main soccer trophy on the planet.

In 2006, the sisters entered the International Body Doubles twins search and the prestigious WWE contest Diva Search. However, the Garcias got no medal place: they were not even included in the top ten participants.

Despite their unsuccessful WWE debut, the sisters signed the contract with the federation in 2007; they were accepted to Florida Championship Wrestling. On September 15, 2007, they appeared in the ring for the first time.

The twins were opponents of Alicia Fox (Victoria Crawford) and Natalya Neidhart and participated in mixed fights. Between battles, Nicole appeared in Heath Slater’s talk show The Happy Hour. The next year, she took part in a bikini contest.

Nikki and Brie identified themselves as The Bella Twins at the WWE TV program SmackDown. The sisters’ fighting style was notable for the invisible switch of their position. While one of the athletes was working at the arena, another sat under it. Fights usually ended with the women’s sudden appearance; their opponents and the audience were astonished.

In November 2008, The Bella Twins appeared in the entertaining show and played the lovers of Carlito and Primo, the members of The Colóns. The woman accompanied the athletes in the ring and participated in the backstage show episodes.

In February 2009, the wrestlers’ company increased: new characters, John Morrison and The Miz. The sisters broke up on the stage: Brie had old fans, and Nikki chose the new ones. As a result, the twins faced each other in the team fight; further on, they had a one-to-one battle; Nicole won.

In spring 2009, the sisters reunited at the WWE TV project Monday Night Raw: they switched places again. The same year, Nikki presented the brand Raw in a battle royal, yet the champion Beth Phoenix defeated her. After that, the women came to another program, ECW. There was a storyline with the English athlete Katie Lea; Nikki beat her at Superstars show.

At that moment, the twins started working at Raw show with guest stars; they rarely performed in the ring. They participated in the third season of the NXT project; in the final, The Bella Twins turned into the villains.

In 2011, Nikki Bella won the Royal Rumble for the first time; she became a candidate for WWE champion title. She succeeded from the second attempt. Nikki held the main award of the wrestling federation for 70 days and lost it to the American athlete Kelly Kelly.

In 2012, The Bella Twins’ results were mixed. As Nikki lost in the Royal Rumble, the executive administrator of the federation fired the athletes. Nikki and Brie spent the season at the independent wrestling show Northeast Wrestling at Newburgh, New York, and CTWE Pro Wrestling. In 2013, the sisters came back to WWE.

June 2013 brought Nikki a fracture of the tibia. After the recovery, the woman started performing solo at Raw and SummerSlam, but later reunited with her sister at Survivor Series. On December 9, 2013, The Bella Twins were named the Divas of the year: they received Slammy Awards. Nikki was called the face of the face of the Divas division; she participated in the match at Night of Champions and lost.

The end of October 2013 was marked with a Halloween costume battle royal victory; the woman became the leading candidate for the WWA championship. The title match occurred on November 23. Nikki fought AJ Lee and won with her sister’s assistance. Thus, Bella became the two-time WWE champion and kept her prestigious title for 301 days.

Soon after her triumph, Nicole had a his cervical spine trauma and needed surgery. The woman left television. She appeared on the public once to gain her Slammy Award as Diva. In July 2015, Nicole was finally able to return to sports. She gave up her trademark attacking technique and developed a new finish under the guidance of Daniel Bryan, her sister’s husband.

The athlete became a permanent participant of various WWA shows. At the beginning of 2017, Nikki joined her real lover, John Cena, in the mixed WrestleMania 3 fight. Later, she announced on her Instagram page that she needed a vacation and break from wrestling.

2018 was marked with Nicole’s comeback to The Bella Twins; she joined WWA again. In September, the women began to oppose The Riott Squad and defeated them at WWE Super Show-Down. Nikki faced one of its members, Ronda Rousey, in the single fight at WWE Evolution and was crashed.

In 2014, Nikki Bella confessed she married for the first time at 20; her school lover became her husband. The couple did not live together; three years later, the marriage was annulled.

In 2012, the athlete started dating the American wrestler John Cena. The fighter proposed his beloved one in spring 2017, after the victory at WrestleMania 33. The next year, the couple split up and canceled the wedding that should have taken place on May 5, 2018. The athletes said they loved and respected each other, so it was hard for them to break up. Thus, they asked their fans to show compassion and hold off rumors.

Today, she participates in the WWE European tour. The first house show brought the fight with Nicole’s old opponent, Ronda Rousey, at the beginning of November 2018.