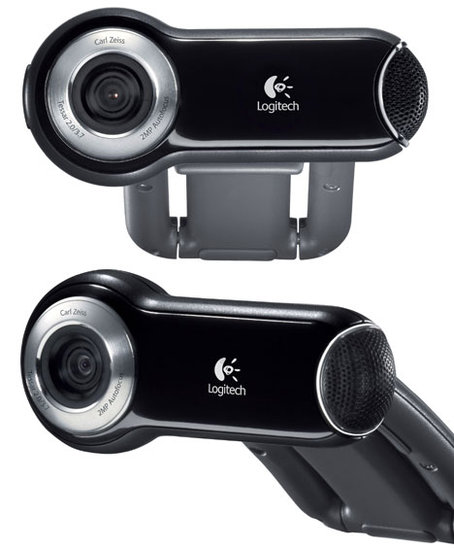 Whether it’s for conference calls, letting kids learn how to use computers while having fun at the same time, or simply to create videos, webcams are the cheapest option among all video-capturing devices. They usually attach to your monitor, or have their own stands that sit on your desktop. The Logitech QuickCam Pro 9000 has taken webcam quality to the next level, able to even compete with traditional video-capturing devices.
At a budget $99.99, the QuickCam Pro is probably the best webcam on the market for its features and quality. The cost is similar to the QuickCam Pro’s competitors. Its style is sleek, an elongated rod of a camera with a plastic stand and hinge clip. Unfortunately it’s not spring-loaded, which means that over the years of wear and tear, it might lose its ability to sustain its angle. That angle can be adjusted to 90 degrees, but to video what’s in front of you, you’ll have to move the whole thing.
The software is superb, especially since the toolbar that appears on screen doesn’t get in the way. With Vista, the installer doesn’t seem to communicate that the software has been uploaded, even though it does upload and functions perfectly. However, the camera will work fine, and the glowing red ring light will let you know it’s active.
The video capture is where the QuickCam Pro earns its superb reputation. Its 2 megapixel Carl Zeiss lens captures video at a resolution of 640×480, which is the best in the business. The autofocus is surprisingly quick, and frames are never dropped. The images are not only sharp, but they’re perfectly balanced in terms of contrast and exposure. We have Logitech’s RightLight to thank for that. What’s more is that the video can be adjusted to a variety of resolutions.
As for the audio, the flashy silver grill over the microphone seems to indicate a quality that isn’t there. The audio is somewhat fuzzy at times, which makes an otherwise perfect product a little less valuable.
Still photos are superb though, despite the fact that the camera has only two megapixels. Photos can be tweaked automatically by the software to appear to have been taken with 8 megapixels, but the actual functional limit is two.
The QuickCapture button on the toolbar brings up the program, which is easy to use. The kids might enjoy various special effects available. The software maps your movements of your eyes, etc. Then it applies face accessories to you, like beards or alien ears or whatnot. If the provided effects aren’t sufficient, there are many downloadable options online.
The QuickCam Pro is the best webcam option on the market, especially considering its low price. Webcams traditionally capture low quality images; the QuickCam improves not only Logitech’s reputation, but the reputation of webcams in general.