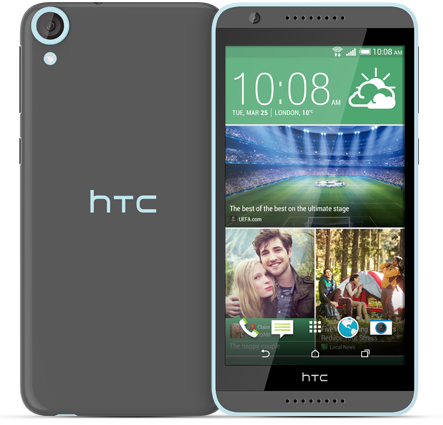 The HTC Desire 820 is the one the first smartphones to include signature on a processor with eight cores architecture to 64 bits and the distinguishing feature of the model that will replaced the HTC Desire 816 in catalog. The design remains a youthful as in the line through the use of polycarbonate and bright colours. The camera, RAM, battery and connectivity are in line for a mid-range model for high performance.

HTC maintains its essence in the new HTC Desire 820 with a polycarbonate shell made with quality finishes beyond doubt and more common in terminals of premium in the midrange. Also the housing stands out not only by the clear color palette chosen, but also does it for its 7.74 millimeters thick. The remaining dimensions correspond to 157.7 millimeters height by 78.74 millimeters wide. Despite the size of the screen, the device weighs 155 grams. HTC wants to conquer the midrange with a format of 5.5 inches size makes only months corresponded in most cases with high-end phalets. However, the resolution of multi panel used is HD Ready, 1280 x 720 pixels.

In technical terms the most notable is the addition of the first Qualcomm Snapdragon processor 615 eight cores processor in the HTC Desire 820. Besides its architectural configuration Big.little two quad-core pairs of 1.5 GHz and 1 GHz respectively, the chip instruction set supports 64-bit and offers high-end graphics performance with GPU Adreno 405. The HTC Desire 820 also has 2 GB of RAM and a system of internal storage 16GB with microSD card support next generation with a capacity of 128 GB.

The main camera of this HTC smartphone has resolution of 13 megapixels and has an opening whose value is f / 2.2. The optical group is wide angle (28 mm) and allows the user to capture video in Full HD resolution. As for the front camera, the new HTC Desire 820 has a good sensor rated at resolution to eight megapixels to take self-portraits or selfies. The multimedia performance of the phablet is completed with the introduction of two powered stereo speakers that make HTC BoomSound. And quality of speakers is praising.

HTC Desire 820 also comes in the Dual SIM, which incidentally have nano SIM format. In terms of connections the model will offer all the typical wireless specifications of the range, but must mentioning is the addition of the 4G or LTE Advanced connection.

HTC Desire 820 has high-density battery of lithium polymer, which, together with the capacity of 2600 mAh ensures that the user may use the device for 24 hours without problems. As for battery life, the manufacturer states that will be up to 22 hours on phone calls and up to 424 hours on standby. Desire 820 proved to be an interesting device, however HTC need to work on the display section, as other manufacturers are reaching 2K resolution, but it would be probably covered after the HTC One M10 release date.