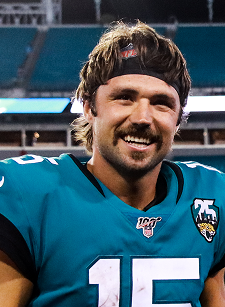 Who is Gardner Minshew?

Gardner Minshew is an American born professional football player who is also know as Gardner Flint Minshew II, was born on May 16, 1996 quarterback for the Jacksonville Jaguars of the National Football League (NFL).

He played college football at East Carolina, before transferring to Washington State, and was drafted by the Jaguars in the sixth round of the 2019 NFL Draft. Following an injury to starter Nick Foles in the first game of the 2019 season, Minshew took over starting duties for the team.

Minshew attended Brandon High School in Brandon, Mississippi where he played quarterback for the Brandon Bulldogs from 2011–2014. He played sparingly during his freshman year, but he became the starting quarterback his sophomore year, a job he kept through his senior year. During his sophomore year in 2012, he led the Bulldogs to the 6A Mississippi Championship game, where the Bulldogs lost, 23–31. Gardner Minshew led the Bulldogs to a South 6A championship his senior year in 2014.

Gardner Minshew was rated as a three-star prospect and the 70th-best pro-style quarterback in his class coming out of high school by the 247Sports.com Composite, which aggregates the ratings of the major recruiting services.[3] Minshew committed to play football at Troy in December 2014.  He graduated from high school early and attended school at Troy on an academic scholarship for a semester before deciding to transfer to Northwest Mississippi Community College.

Minshew began his college football career in 2015 at Northwest Mississippi Community College. He led the team to the NJCAA National Football Championship, passing for 3,228 yards with a 60.8% completion percentage.

Gardner Minshew transferred to East Carolina University in 2016 where he played in seven games while starting two at QB for the Pirates. In 2017, he split time with Duke University transfer Thomas Sirk as East Carolina’s quarterback.

Gardner Minshew began to show his talents late in the season by passing for over 350 yards in 3 consecutive games (463 yards and 3 touchdowns against Houston, 444 yards and 4 touchdowns against Cincinnati and 351 yards against Memphis). Minshew finished the year with 2140 yards passing and 16 touchdowns for the Pirates. Minshew received his bachelor’s degree from East Carolina University in December 2017.

Minshew enrolled as a graduate student at Washington State in the fall of 2018. He became immediately eligible under the NCAA’s graduate transfer rules.

Minshew helped lead Washington State to a school-record-breaking 11 wins in 2018. In his third game as the school’s starting quarterback, he passed for a career high 470 yards and a school record 78.9% completion rate in a 59–24 victory over Eastern Washington. On November 17, he threw for 473 passing yards and broke another school record with seven passing touchdowns against Arizona.

At the end of the 2018 regular season, Gardner Minshew led FBS in pass completions (433), pass attempts (613), passing yards per game (367.6) was second in passing yards (4,477) and finished in the top five with 38 touchdowns. During Washington State’s Alamo Bowl win over Iowa State, Gardner Minshew claimed the Pac-12 single season record for most passing yards, a record previously held by Jared Goff.

Gardner Minshew finished fifth in voting for the Heisman Trophy, becoming the ninth player in Washington State history to place in the top 10 for the award, and the highest WSU finisher since Ryan Leaf, who was third in Heisman voting in 1997.

Gardner Minshew was drafted by the Jacksonville Jaguars in the sixth round, 178th overall, of the 2019 NFL Draft.

On September 8, 2019, Minshew made his NFL debut against the Kansas City Chiefs when starter Nick Foles was taken out of the game due to a shoulder injury. He completed 22 of 25 passes for 275 yards, two touchdowns and an interception in the 40-26 loss.

Gardner Minshew was named the starter going forward after it was revealed that Foles had suffered a broken clavicle.[16] During Week 2 against the Houston Texans, Minshew finished with 213 passing yards and a touchdown along with 56 rushing yards as the Jaguars lost 13-12.

Jacksonville Jaguars QB Gardner Minshew is entering his first year in the NFL. He will earn a salary of $495K as part of his rookie contract.