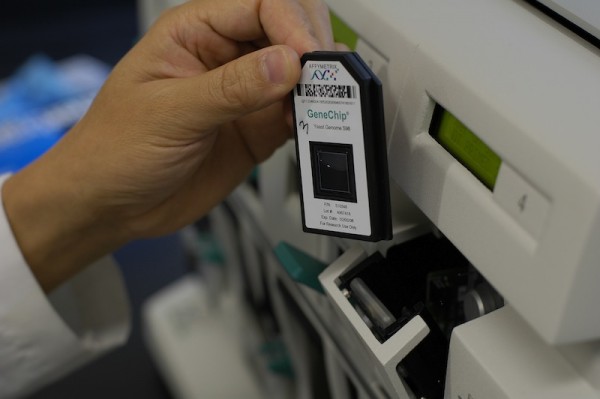 Microarray manufacturing is a complicated process but this technology can be understood easily through some visual descriptions. Microarray is prepared with by adding DNA spots to a slide made out of silica or glass which is the size of a postage stamp. This allows the DNA to become a part of a solid base forming what is also called a gene chip. Thousands of tiny dots are added to the chip in a grid-like arrangement. This gives it the name DNA microarray.

Small DNA sequences from specific genes are used in these grids. On the other hand, a small-molecule microarray consists of small molecule dots as opposed to the dots of DNA sequences used in DNA microarrays. Both these types of microarrays have the same function of identification. The difference in their constituents allows them to detect multiple components applied to them at the same time.

A DNA microarray is used to detect the identity of unknown DNA or RNA samples. When added to the DNA microarray, the numerous unknown RNA or DNA in a sample hybridize by attaching themselves to the strands of complementary known sequences already present on the chip. Similarly, the small-molecule microarray functions at a molecular level providing the same function as a DNA microarray to samples such as unknown proteins. When a protein sample is applied to this microchip, the known molecules on the microarray that bind to the protein reveal the identity of the known sample.

here are some very easy ways to understand how DNA microarrays or gene chips are made. Cost effective and large-scale, qualitative production of DNA microarrays is extremely important to the many different types of research that it is supplementing today. This technology is growing faster than ever as the genetic research that it aids can be applied across many categories in the world of biological sciences. From directly benefiting humans in disease related studies such as cancer research to indirect benefits by investigations in pest control, DNA microarray experimentation is being used everywhere.

Anna Belluci has developed her expertise in the field of DNA microarray and microbiology despite being a mother of two. She has outsourced her knowledge and recommends http://www.arrayjet.co.uk/ to beginners as well as experts.