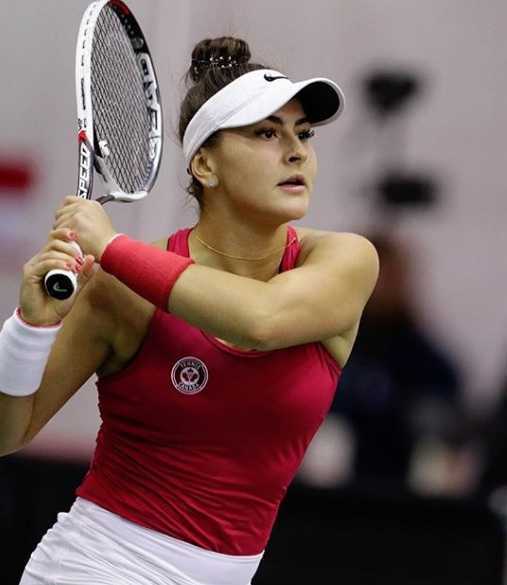 Who is Bianca Andreescu?

Bianca Andreescu is Canadian born teenager and tennis player, Bianca Andreescu rocketed in her career up 36 places to a new best of 24th in the WTA rankings a day after her historic triumph at Indian Wells. The 18-year-old Andreescu beat Germany’s Angelique Kerber in final to become the first women’s wildcard to win the Indian Wells.

Bianca really came out of nowhere and she deserved to win. She played amazing tennis. What she can improve the most is the forehand, it gets a little off when she gets nervous, physical fitness that will just happen, she’ll become more match tough. Her tennis IQ, shot selection is really outstanding.

Past year Naomi Osaka was a big surprise, this year its Andreescu. She’ll be in the top-10 by the end of the year if she plays like this, if not better.

Bianca was the only child of father NicuAndreescu and mother Maria Andreescu who was born at Mississauga, Ontario, Canada on June 16, 2000. She is now 18 years old but she will be turning 19 as of 2019 on her upcoming birthday in June. Her birth name is Bianca Vanessa Andreescu.

About her education, she attended Bill Crothers Secondary School in Toronto. There is no information regarding her attending any university or college.

Bianca is very young and beautiful. She stands 5 feet and 7 inches tall and weighs about 60 kg. She is a very attractive and strong player. The other information regarding her body measurement will be updated soon.

At the 2016 Rogers Cup, Andreescu was advised and encouraged by Simona Halep to turn professional very early.

In January of 2014, Andreescu won Les Petits As, one of the most prestigious 14-and-under tournaments in the world.

In the same year of 2014, she won her first junior titles, taking the singles title at the Grade 5 tournament in Havana,

In 2015, she began the season by winning both the singles and doubles titles at the Grade-2 tournament in La Paz.

In 2015, she qualified for her first junior Grand Slam but was defeated in the first round in girls’ singles—by the eventual runner-up, Anna Kalinskayaand in the second round in girls’ doubles at French Open.

In December of 2015, at 15 years of age, she became the first Canadian since Gabriela Dabrowski in 2009 to win the under-18 Orange Bowl, a Grade A tournament.

At the Australian Open in 2016, she advanced to the third round in singles and doubles before withdrawing from both because of recurring injuries including her left adductor, right ankle, and a stress fracture in her foot.

At the Gatineau 25K tournament of 2016, Andreescu claimed the first professional title of her career with a straight-sets victory over Elizabeth Halbauer.

In 2016, she also won the Gatineau doubles title with compatriot Charlotte Robillard-Millette.

In February of 2017 in Rancho Santa Fe, she captured her second 25K singles title with a straight sets win over Kayla Day.

At the junior French Open in 2017, she reached the quarterfinals in singles and captured her second straight Slam doubles title with compatriot Carson Branstine.

At the Rogers Cup of 2017, she was awarded a wildcard in the singles main draw where she was defeated by world No. 55 TímeaBabos in the opening round.

She played Fed Cup 2018 for Canada in April in Montreal and won the deciding doubles match with her fellow teammate Gabriela Dabrowski to advance to World Group II.

She won in three tight sets over Angelique Kerber for her first tour victory in Indian Wells in 2019.

For the 2nd consecutive season, the winner of @BNPPARIBASOPEN lifts the trophy @usopen and makes major history for their respective countries.

She has won 2 awards in short career and they are Fed Cup Heart Award, and Tennis Canada female player of the year. We hope that in the upcoming years of her career, she will many significant awards.

Married or Single or In A Relationship? Is She Lesbian Or Not?

She is just 18 so we can presume that she is not married. She is single and might be looking for a relationship. Her sexual orientation is straight and she is not a lesbian.

Know About His Children:

The information regarding her children will be updated soon.

Net Worth And Salary

Her net worth and salary are on under review but it will be updated soon.

The 19-year-old is now the youngest Grand Slam winner since Maria Sharapova at the 2006 US Open.https://t.co/ci4r0ZAnOH pic.twitter.com/xz5Phx2lFz