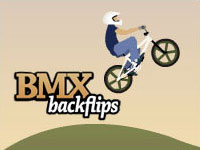 If you are a fan of BMX video games then you will be happy to know that there are a lot of free BMX games you can play online. While there are virtually hundreds of BMX video games online, the problem is finding the good ones. Just because a BMX game lets you be a BMX racer doesn’t mean that it is good. A good BMX games needs to be easy to play, challenging, and most importantly, fun. There are a lot of really good BMX bike games out there on the internet but the following five BMX games are some of the best you can find.
Twilight BMX
Twilight BMX is one of the most original offerings in the online BMX game genre. First there are the graphics which are actually really well done. Not only are the graphics of Twilight BMX really well done but the concept of the game is cool too. Most BMX games feature you controlling your rider through a race course or on a half pipe, but this game is different. In Twilight BMX you are trying to outrun a tornado. You start out with the tornado right on top of you then have to outrun it while jumping over things. Twilight BMX is a good original game and you should check it out.
BMX Stunt Island
The BMX Stunt Island is all about stunts, but it happens on an island that is all about, well BMX stunts. This is a great BMX stunt game and offers players a fun way to do BMX stunts. While the stunts you can do are the same as in most other BMX stunt games, the setting makes this game worth playing and will keep you hooked for quite a while. If you like BMX stunt games but are bored of half pipes, give BMX Stunt Island a try
BMX Cycle Maniacs
BMX Cycle Maniacs is exactly what it sounds like, a game about BMX cycle maniacs. You take on the part of a BMX rider who goes around like a maniac performing the scariest and most dangerous tricks you can think of. What really makes this game go though is just how cool it looks. Instead of giving you a racer in a T-shirt and jeans, you have a goofy looking rider that will make you laugh maniacally as you do your stunts.
BMX Stunt Park
BMX Stunt Park is a pretty standard BMX stunt game, but what sets it apart are the fluid controls. While you use the keyboard to control your BMX racer, the controls are actually really well done and you will feel just like you are playing a console game. While the premise and graphics are pretty much the same fare you get from other BMX stunt games, the controls make BMX stunt park exceptional.
BMX Ramp
Another standard BMX stunt game, what sets BMX Ramp apart though is the variety of tricks you can do. Where a lot of BMX games only give you a few tricks, BMX ramp gives you more than usual. If you are into doing lots of tricks on a BMX, then give this game a try.